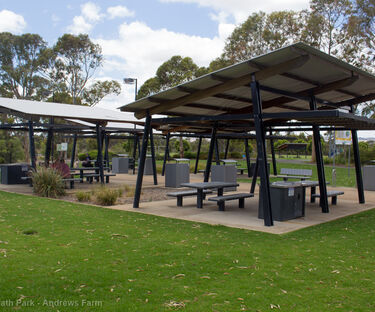 Stebonheath Park is home to one of Council's wetlands, boasting 3.6 hectares of wetland, boardwalks and bridges to provide the best views of the park and northern Mount Lofty Ranges.

Stebonheath Park is the ideal park to hold a community or commercial event. Families can hold a birthday party or other gathering at the park without prior approval, but if you wish to have a jumping castle or other amusement you must contact Council in the first instance to seek approval.

Feeding Ducks and Other Birds

Please DO NOT feed the ducks at parks, reserves and playgrounds in the City of Playford.

Native ducks and other birds that live on water stay healthy by eating foods like aquatic plants, seeds, grasses and insects.

Many foods that humans like to eat, including bread, can be harmful to native ducks and birds and can make them sick. Uneaten food can also contaminate the water and encourage vermin and foxes to the area.

Rather than feeding the ducks, there are other ways you can enjoy them in their native habitat, such as:

Read more about feeding wildlife at the South Australian Department for Environment and Water's website.

Stebonheath Park is home to three distinct playgrounds in close proximity to each other. Suitable for toddlers, young children and older more adventurous kids, there is sure to be a playground to suit, or perhaps bring along the BMX bike to tackle the ramps and dirt track?

In 2008, 'The Apology' to the Stolen Generations was announced in an historic speech by then Prime Minister, Kevin Rudd.

The Stolen Generation Memorial and Healing Garden is a place of remembrance, reflection and respect towards Aboriginal people and their families and communities.

Artwork completed by the Circle of Hope and other members of the Stolen Generations can be seen in the Garden.

The Memorial and Healing Garden is a local acknowledgement of the Stolen Generation experience, which touched the lives of many Aboriginal and non-Aboriginal people in northern Adelaide. It serves as an educational resource, fostering cross-cultural respect and understanding in South Australia.

The City of Playford is proud to have a place of remembrance, reflection and respect for the whole community and hopes to broaden and deepen South Australia’s cultural richness.

The Stolen Generation Memorial and Healing Garden proposal gained the support of many programs and organisations including: