You’ll fall for this Game of Thrones-inspired paint job 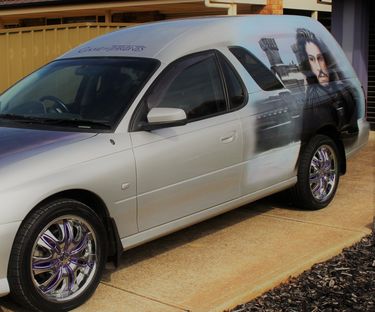 Share this article
Davoren Park woman Sandy Williamson has no Ygrittes about spending thousands of dollars to deck out her Holden VY Commodore with a customised Game of Thrones paint job.

Davoren Park woman Sandy Williamson has no Ygrittes about spending thousands of dollars to deck out her Holden VY Commodore with a customised Game of Thrones paint job.

In fact, she thinks the old gods and the new would be delighted by her impressive design effort that has her quickly becoming the Queen of the North.

The attention-grabbing paint job features the Game of Thrones sigil, as well as stunning characterisations of Jon Snow, the Night King and Daenerys Targaryen with two of her dragons, along with the Iron Throne.

And it is certainly turning heads right across Adelaide (and the Seven Kingdoms).

“I have lots of people taking photos of it whenever I take it out. I was on the Main North Road one day and I had a car chase me trying to get a look at it. It freaked me out a little.” Sandy said.

The amazing paint job was completed by Ray Harrison, of Airbrush Venturi paint school, and took three months of collaboration with Sandy before the right look was found.

The car’s interior is also customised in Game of Thrones memes, with wolf’s heads embroidered into the purple (Sandy’s favourite colour) upholstery.

With still half a year to wait before the eighth and final instalment of the epic Game of Thrones series is aired, Sandy is as impatient for its return as other fans.

“There is so much to come with Khaleesi and Jon Snow,” she said.

If you don’t catch Sandy, a member of Majestic Vanners Australia, on the roads you’ll be able to see her at a variety of car shows across South Australia.