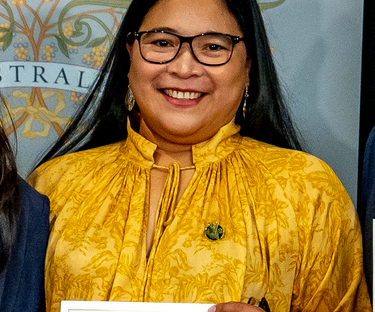 Share this article
Australia Day is a particularly meaningful date to become a new Australian citizen, and we officially welcomed 78 new ‘Aussies’ this past January 26. One of the conferees was Ar-En, who arrived on Australian soil in August 2015 from the Philippines.

It’s a miracle that we came, you don’t expect things to happen but really situations just occurred to bring us here.

Australia Day is a particularly meaningful date to become a new Australian citizen, and we officially welcomed 78 new ‘Aussies’ this past January 26.

One of the conferees was Ar-En, who arrived on Australian soil in August 2015 from the Philippines.

Playford News sat down with Ar-En to talk about her journey to becoming an Australian citizen, and her thoughts about living in Playford.

The very first thing you notice about Ar-En is her warmth and kindness – she easily outshines the sunny yellow dress she wore to take her citizenship pledge.

Ar-En says that Australia was once just a dream she had, an idea that ‘popped’ into her head one day when she was thinking about the future for her family of seven. “Work in the Philippines was very difficult to find at that time”, says Ar-En, so her husband, Laurence Vincent, had been working away in Saudi Arabia for two years. ‘Laurence of Arabia’ does not escape our notice and we share a laugh.

When he returned home, she said it was time for them to ‘find another country’, so they applied online, and six months later Laurence Vincent was given a 457 Visa to come to Australia. Ar-En says “the waiting was almost impossible for my husband and he wanted to give up and go back to Saudi Arabia – but finally our faith was rewarded!”

He found work in Sydney and was eventually transferred, through his company, to Munno Para. Ar-En followed a year later, nominated by her husband, along with their five children.

“The first thing I noticed about Australia when I stepped off the plane, was the people, and how sweet they are!,” Ar-En says. When asked to clarify, she said “Yes, every greeting I heard was about friendship and kindness – I heard ‘gidday mate’, ‘hello love’, ‘hi sweety’ and I thought that Australians were so very sweet!”

The people are Ar-En’s favourite thing about Playford, and she stills thinks we’re sweet five years later. “Everyone is so friendly, this is a great place to live,” she says. Ar-En is currently working in aged care and studying to increase her qualifications.

Back in the Philippines, Ar-En was a community organizer, and someone people would go to for help and to advocate on behalf of marginalized groups such as children and those living with a disability. Connecting with a community is important to Ar-En and she wants to continue that work here in Australia.

I want to be connected with the community by getting access to organisations that seek to deliver services. Community is empowerment.

In the meantime, she is thrilled to be working in a sector where she is happy and where her clients appreciate her.

When asked what her favourite things about Playford are, she says "I love the laid back lifestyle here. There are many things to like about it. The north is really speaking to us - here we have freedoms and a progressive community. Thank you for welcoming us!”

She also mentioned that her family have fully embraced the Aussie barbecue tradition, her kids favour steak and lamb chops and she is partial to salads. This makes them 100% Aussie, and we are so pleased they have chosen Playford as their home.

A warm welcome, Ar-En, to you and your family.