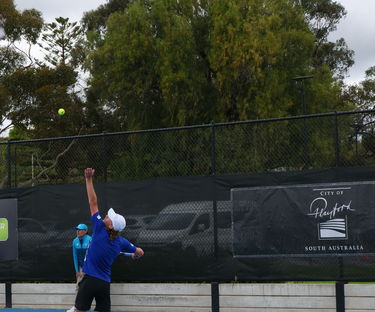 A highly regarded tournament in the Australian Pro Tour calendar, Playford Tennis Centre is one of a few able to host men’s and women’s matches concurrently.

The trophies reflect their Aboriginal culture and storytelling. Both girls were very excited to learn that their designs would go across the country to new homes and be featured on the Australian Tennis website.

While the weather was good for ducks, it’s wasn’t for tennis. The tournament was plagued by drizzly weather stopping and starting play in the first half of the week.

The pros were never deterred by the weather, with $110,000 USD in Tennis SA prize money the ultimate carrot and stick.

Wimbledon champion Max Purcell hit the court in Playford and so did South Australian and former world number 23 Luke Saville.

More than 250 people made a racket at our Twilight Session, flooding the kids’ zone and getting close to native animals and players from Adelaide Thunderbirds, Central Districts and Adelaide United.

There were long lines to the balloon stand, face painting and Henna station. A mild frenzy erupted when Adelaide United gave out branded guernseys!