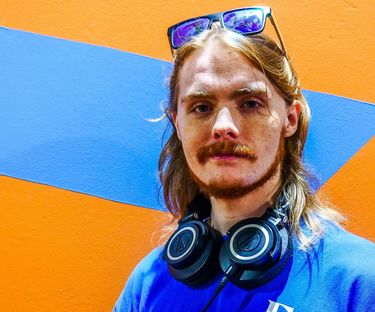 Share this article
From supporting local gigs at the Northern Sound System (NSS) to working on international touring acts such as U2 and Elton John, Michael Murphy is striking the right note in the music industry.

From supporting local gigs at the Northern Sound System (NSS) to working on international touring acts such as U2 and Elton John, Michael Murphy is striking the right note in the music industry.

Michael, 20, has volunteered at NSS for about seven years after finding out about the youth-music facility from a friend and then attending programs, Bangers and Mashups and Check 1, 2.

From participant to now volunteering in these music programs, Michael has learned how to use technical equipment and manage events.

“Normally I am here operating the lighting equipment, some time I fill in the studio, other times I set up equipment for people who want to DJ out the front or want a quiet place to just practice,” he said. “I have definitely learned a lot in managing shows, how they run in the back end from set up to pack down. “I have also learned how to deal with people, there are a lot of people skills in this.”

Volunteering has allowed Michael to build on his industry network, which has been his avenue to gain work on large-scale concerts.

“From here I got to work with a group that do staffing for events,” he said. “So I have been able to work on U2, Elton John, I have worked on a couple of other big ones. Jimmy Barnes at Seppeltsfield was fun and it’s just been great getting into the industry, it’s been a good doorway to it.”

When Michael isn’t volunteering or working, you can find him in the studio producing his own music.

“From all the people I have met here I’ve just gone up,” he said. “I’ve been signed to a few record labels, currently with a few in the US, and I have been on the radio a few times as well,” he said. “One of the studio techs here, we got to know each other through volunteering, we’ve now made three or four songs together and been signed to some big labels.”

Michael has high hopes for his career in the industry and aspires to one day own his own studio.

“It’s just so much fun, lots to learn, you can immerse yourself – there is never a dull moment,” he said. “I want to get more into the industry as I do a music production and engineering, so being able to run my own studio or work for bigger companies.”

NSS has up to 25 young volunteers who support the team in programs for music creation, gaming, broadcasting and VFX. Volunteers also help at NSS’ live events supporting promotion, set up, lighting and sound.