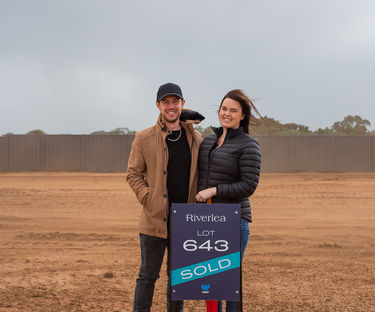 City of Playford Mayor Glenn Docherty cut the ribbon today, in a major milestone for the $3 billion development.

“Riverlea Boulevard is a signature statement from Walker, flanked by dozens of beautiful palm trees and linking to the first residential stages where house construction is well underway,” Mr Walker said.

“This Boulevard will eventually connect 12,000 residents to their new homes, seamlessly linking with Port Wakefield Road and onto the Northern Connector, into Adelaide’s City Centre.”

The new intersection and Boulevard provide safe access in and out of Riverlea and also to Playford residents and visitors travelling on Angle Vale road.

Mayor Docherty said the grand entrance was a bold statement to welcome residents to their new community.

“It’s an honour to officially open the main Boulevard into this incredible master planned community, which is transforming Playford with hundreds of new families calling our city home,” Mayor Docherty said.

“Walker Corporation has invested wisely from day one of this development to ensure the major infrastructure is well established before the first homes are completed.”

Walker Corporation is creating a community which will have it all on their doorstep, with 420 hectares of open space, 30 hectares of lakes surrounded by parks, bike paths and running tracks, four schools and four retail centres.

Over 500 house and land lots have been sold to date and hundreds of families are on the waitlist for the next Riverlea releases.

Tamara and Ben Ciampa said the opening of the Boulevard has really brought their Riverlea vision to reality.

“We loved the masterplan and just can't wait to bring up our family in the community,” said Tamara.

“Be able to ride bikes, take them down the lake and have picnics - it will be great,” said Tamara.

Located just 35 minutes from Adelaide’s CBD, Riverlea will create 10,000 jobs for the South Australian economy building over 12,000 homes for 30,000 residents. Residents will begin moving in from mid next year.

Riverlea offers a long-term solution to the rapid population growth expected in Adelaide’s North West, anticipated to climb by 26,000 over the next decade alone.

Riverlea has a range of perfectly sized blocks which cater to people at all stages of their lives, from singles to empty nesters looking to downsize. All blocks are carefully integrated to be close to childcare, schools, shops, bike paths and walking trails.