Paw-some upgrades on the way 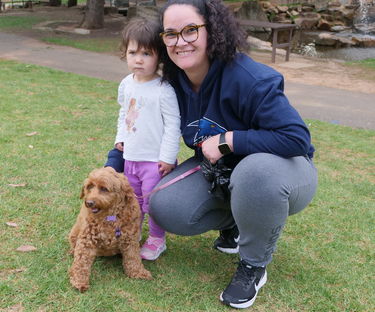 Share this article
An upgrade to the eastern portion of Fremont Park will deliver a new play space for our four-legged community and their human companions.

An upgrade to the eastern portion of Fremont Park will begin next week, featuring a new dog park which is set to become a popular destination for four-legged friends and their human companions.

Dog owner, Mel, who recently discovered the park, is excited about the upgrade.

“Having a dog park here would be useful because when my husband comes, we can have one of us with the dog in the dog park and another at the playground,” she said. “It will be good because Ruby [the dog] loves running around but we can’t let her off here with everyone around.”

After the successful completion of stages 1 and 2 of the Fremont Park upgrade in 2018 and 2020, this third stage will further elevate Fremont Park as the City of Playford’s premier park.

Mel said the park will become a regular destination for her family.

“We’ve only discovered it recently, but we will be using it a lot now because the playground is so well suited to toddlers, so we make the effort to come out here.

“Because we have the dog and a child, and it will be great the whole family can come… and Ruby must be on the lead at most parks so a small dog park that we are comfortable with would be great. We will be coming back a lot more”, she said.

As well as providing a dog park for small dogs and a dog park for large dogs, the upgrade will deliver an expanded events space with irrigated lawns, extension of the fitness loop path, a new gazebo, native gardens and tree planting as well as amenities include off street parking and public toilet.

The design and features were shaped by community feedback and will complement the all-abilities playground, basketball court and barbecues installed in 2020 (stage 2) and the upgrade of Adams Creek and the construction of a new shared path and irrigated law area that occurred in 2018 (stage 1)

Access to the eastern portion of the park will be limited during construction, which is expected to be completed by mid-2023.