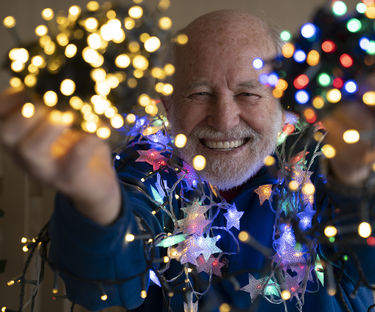 Share this article
Local Playford resident, Ron Jones and his wife Marlene, have decorated their home in Munno Para with Christmas lights for the past nine years.

Local Playford resident, Ron Jones and his wife Marlene, have decorated their home in Munno Para with Christmas lights for the past nine years.

The couple moved into their home in mid-2012, with their first lights installed during the festive season that same year. Ron has now adorned their home with hundreds of lights. “When we first put them up, people said ‘it’s good to see someone bringing the Christmas spirit’ and we’ve just kept it, because it’s for the community,” Ron said.

Ron’s lights helped to build a sense of community connection, and for Ron, that’s what truly makes a neighbourhood special. The community continue to visit the display year after year, with the pair watching families grow right in front of them. “People say that they’ll see us next year or that they’ll bring their grandkids back,” Ron said.

Ron and Marlene regularly talked to visitors as they explored their display with a couch set up on the porch for that very purpose. “It makes us feel warm and gives us some satisfaction for the work and the time we’ve put into it,” Ron said. Visitors often left Christmas cards in their letterbox, congratulating them on their display and thanking them for their hard work.

Ron’s sense of festive spirit has inspired others in his neighbourhood to create their own displays. “There are about four in our street now and down the side street there are several,” Ron said. “Right around the Greenfields and Playford Alive area, you’ll see them.” Ron laughed and said: “Every now and again we go for a drive just to have a sticky beak, get ideas, well... pinch ideas.”

To visit Ron and Marlene’s Christmas display, make your way to the corner of Cyprus Street and Scarlet Avenue in Munno Para.