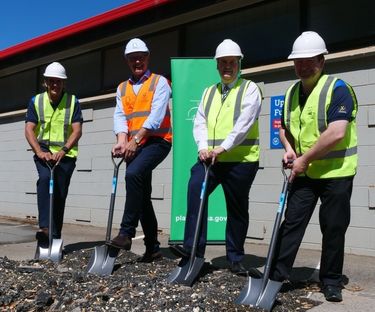 Work will start this week on the $1.8 million upgrade of Elizabeth Oval, boosting facilities for local Australian Rules Footballers.

The improvements include demolishing the ageing change rooms and building three new unisex change rooms on the same site.

Additionally, lighting will be installed at the nearby Playford International College and the softball area of Ridley Reserve.

City of Playford Mayor Glenn Docherty and Minister for Recreation, Sport and Racing Corey Wingard signalled the start of construction at a ground-breaking ceremony at the oval at 11am on Thursday 27 January.

Mayor Glenn Docherty said Central Districts Football Club had been closely involved in the design of the new facilities.

“The new change rooms and lighting will help cater for growing demand, particularly from female footballers. We are also installing lighting to support local softball by enabling night-time training and matches at Ridley Reserve.

“I would like to thank the State Government for joining City of Playford to fund the upgrades.”

The three new change rooms will all include showers, toilets and a trainer’s room.

The current change rooms are more than 50 years old and do not properly cater for female and junior players.

The new change rooms are expected to be completed in June this year. Footballers will have access to temporary change rooms during construction.

The total project will cost $1.8 million. City of Playford has received an $894,000 grant from the Office for Recreation, Sport and Racing and is providing the balance of funding.

Work to install lighting at Playford International College will begin in the coming months.

The project underlines a partnership between City of Playford, the college, the Department for Education, Central Districts Football Club and the SANFL which seeks to maximise the use of new lighting.