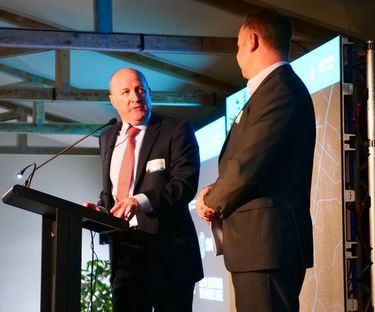 South Australia’s first defence industry summit since the overhaul of the submarine program focused on Australian industry participation to grow jobs and investment in northern Adelaide.

The initiative, organised by the City of Playford, cemented northern Adelaide as the home of defence capability in this State with about 160 people representing industry in attendance at the Central Districts Football Club.

City of Playford Mayor Glenn Docherty said the 2021 Defence Industry Day aimed to promote local participation in the sector and to create new opportunities and jobs.

“Our first Defence Industry Day will connect global and local companies while showcasing the many benefits the City of Playford has to offer,” Mayor Docherty said.

“The summit will hear from the major defence manufacturers on the new opportunities that are emerging, and the support and training available to enable businesses to be capability ready.

“We already have some incredibly exciting examples of how the City of Playford and northern Adelaide are participating in the defence sector.”

Located in the Lionsgate Business Park at Elizabeth, producing components for the Joint Strike Fighter.

Located at Edinburgh Parks, is overseeing significant projects for defence such as the Hunter Class Frigates and Jindalee Operational Radar Network.

Mayor Docherty said the City of Playford was ideally located to support the continued expansion of the defence sector.

“The Edinburgh Defence precinct – one of Australia’s only two super bases – is on our doorstep while the city is within easy reach of transport hubs, and weapons research and testing facilities,” Mayor Docherty said.

“The city offers superb housing, sporting and community facilities, and is close to Adelaide via the Northern Connector.

“Our Council can see the defence industry continuing to grow so it’s important that we support it and the creation of jobs that will sustain our growing population into the future.”

“With at least five firms working on major defence-related projects in the City of Playford, and extensive scope for growth in the 123ha Lionsgate Business Park (former Holden site), existing industrial areas across Playford and potential further development in Greater Edinburgh Parks, our defence manufacturing future is looking bright.”

Attracting defence manufacturing and growing local jobs are key deliverables of the Playford Community Vision and the Council’s Strategic Plan.