City of Playford Tennis International - All you need to know 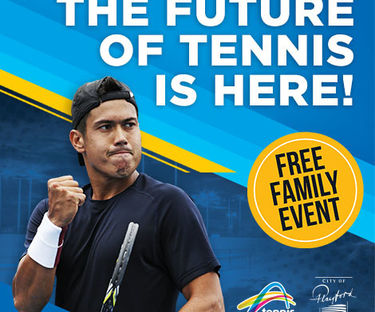 Share this article
Tennis champions of the future are returning to Playford with international men’s and women’s tennis hitting off at our world-class sporting facility.﻿ Event details within...

Tennis champions of the future are returning to Playford with international men’s and women’s tennis hitting off at our world-class sporting facility.

As part of the Australian Pro Tour Calendar, Playford Tennis Centre will host its third Men’s Challenger and Women’s ITF Futures tournaments, from 28 October to 3 November, featuring players from all over the world.

The City of Playford Tennis International is South Australia’s most prestigious tennis event in 2019, with players competing for $160,000 in sponsors’ prize money.

The tournament itself is a lead-in for those preparing to compete in Australia’s summer of Tennis. This free event is a great opportunity for everyone to witness some great tennis and to be inspired by sporting brilliance.

In addition, two up and coming international tennis stars who competed in the 2018 Playford Tennis International went on to play in the September 2019 US Open Men's and Women's Finals.

Canada's Bianca Andreescu, 19, claimed the biggest achievement of her career when she defeated Serena Williams in straight sets to win the women's US Open decider.

The next day in the Men's Final, 23-year-old Russian Daniil Medvedev took Rafael Nadal to five sets, but ultimately fell short in a tight nail-biting final.

The City of Playford Tennis International has been awarded Tennis SA’s Most Outstanding Event over the last two years, so come along to experience the exceptional matches and free family fun throughout the week.

Free Kids Zone / ANZ Hot Shots
Aside from the on-court action, there’s fun for everyone with the free Kids Zone, offering fun activities for the whole family and our young future tennis superstars.

Entry and participation in the Kids Zone is free and open to everyone, so bring the kids along to enjoy a variety of fun filled activities.

Refreshments can also be purchased at the indoor café.

Please be advised that due to the predicted bad weather scheduled for the evening of Friday 1 November, we have made the difficult decision to cancel the City of Playford Tennis International Twilight Session.

All matches will now be played throughout the day on Friday, starting at 10.00 am.

Kids activities and off-court competitions have been transferred to Finals Day on Sunday 3 November, with action kicking off at 11.00 am.

If you have any further questions or queries about the event, please contact Kate Semiz and Ryan Peremiczko in the Sport & Property Team in the first instance.

Win a Smashing Door Prize
When you arrive at Sunday Finals Day, collect an entry form at the door and drop the completed form in the box for your chance to win our door prize - two tickets to Adelaide International on 15 January - plus the opportunity to toss the coin to decide who serves!

Be early - there will only be 200 entry forms available. Winner will be drawn following the Men's Doubles Final - estimated to complete between noon and 3pm. See terms and conditions below.

From 12 – 18 January, international tennis is set to return to the new-look Memorial Drive. See some of the world’s best players, all battling it out for top prizes. There’s something for everyone, with a family zone full of activities for the kids, exclusive bars, entertainment, food, drinks, and so much more. Now is your chance to win a double pass PLUS the opportunity to toss the coin at one of the matches!