A change in the air 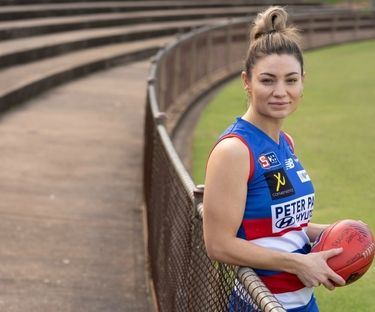 Share this article
Three new unisex changerooms will soon be completed at the X Convenience Oval in Elizabeth, as participation in women’s AFL continues to increase across Playford.

Three new unisex changerooms will soon be completed at the X Convenience Oval in Elizabeth, as participation in women’s AFL continues to increase across Playford.

Skipper of the Central Districts Football Club (CDFC) and the Bulldogs’ 2022 Best and Fairest, Shelby Smith is excited for the future of women’s Aussie Rules.

From watching her dad play at Centrals, to now playing for the same club and having her daughter watch the team on game day, Smith acknowledges that things have come a long way since she was younger.

“You’ll notice the impact that women’s footy will have on younger generations,” Shelby said. “SANFL competitions and now AFLW — girls have more to strive for and role models to look up to. Female representation is so important.”

This year the Central District Football Club had more than 120 female players try out for the youth development squad across under 14 and under 16 age groups.

A new report released by the SANFL said there would need to be at least 12 extra football ovals in South Australia by 2032 to meet the growth in female participation. The report also acknowledged that 80 per cent of the current football changeroom facilities are of an inadequate standard for female players and umpires.

The three new changerooms at Central Districts each include showers, toilets and a trainers’ room and are an essential part of having modern, purpose-built facilities available to meet growing demand.

The project was jointly funded by the Office of Recreation, Sport and Racing and the City of Playford.

The 2023 SANFLW season will kick off early next year. For season announcements and CDFC news — as well as ways to stay connected to footy during the summer months
— visit cdfc.com.au