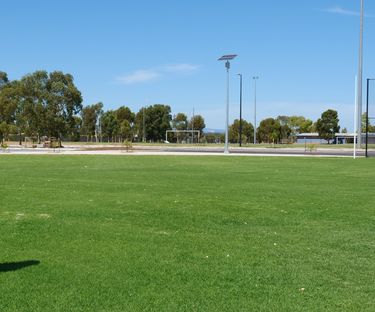 Share this article
Local Aussie rules footballers, soccer players, cricketers and netballers are cheering the completion of a more than $5 million expansion of the Angle Vale Community Sports Centre.

The expansion includes a new junior and senior soccer pitch and a floodlit oval for football and cricket, coaches’ boxes, an additional 98 car parks, landscaping and footpaths.

Mayor Docherty said it was exciting to see the centre nearing completion.

“Council’s long-term investment in the Angle Vale region for sport sees the facility continue to grow. This is a major benefit to residents in this part of Playford,” Mayor Docherty said.

“It is one of our city’s most popular venues for sports people and supporters.

“This upgrade is a win for more than 1230 football, soccer, cricket and netball players. Designs for the BMX track will begin soon.”

The latest stage has been funded by $4.5 million from the City of Playford and a $590,000 grant from the State Government through the Grassroots Football, Cricket and Netball and Facility Program.

The next stage includes building a BMX track, playground and public toilets.

Work will cost an estimated $730,000 and is expected to be completed by the end of the year.

The expansion of the centre began in 2013 and has been supported by funding from Council and Federal and State governments.