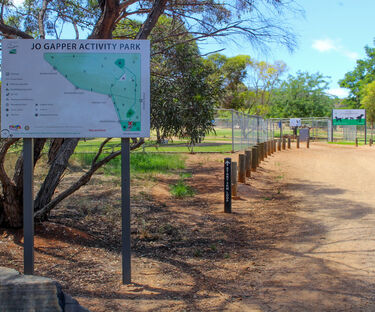 Jo Gapper Activity Park is one of the jewels in the crown of Playford’s Parks, Reserves and Playgrounds. Fitting neatly into all three categories, the park features a children’s playground, sporting facilities, including football oval, basketball and tennis courts, walking trail and lookout, and a spacious off-lead dog park for your four-legged friends.

An English migrant of the 1950s, Jo Gapper OAM was the first elected Mayor of Munno Para Council. After becoming widowed in 1974, Mrs Gapper threw herself into a life of community service, including spending 15 years on Council, with 10 as Mayor. She co-founded the Greening of Munno Para Group (now Playford Greening and Landcare Group) and was involved in the development of the Munno Para Shopping Centre. Mrs Gapper received the Order of Australia Medal in 1987.

Please note that the gates to the carpark at Jo Gapper Activity Park open daily at sunrise and shut at sunset.