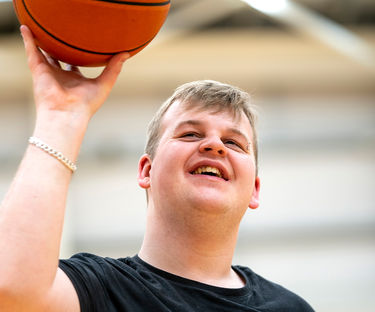 Share this article
Matt Bartley has been attending the Playford Friends Group for almost three years, where he has been able to develop skills, make new friends, familiarise himself with different services available in his community, and most recently, became a star in the new Look ‘n Cook video series.

Matt Bartley has been attending the Playford Friends Group for almost three years, where he has been able to develop skills, make new friends, familiarise himself with different services available in his community, and most recently, become a star in the new Look ‘n Cook video series.

According to Matt, participating in the video series, “…was awesome! I’ve never done a cooking show before and it was a really cool experience.”

The video series has been developed to support the Look ‘n Cook Book – a recipe book that aims to make cooking possible for more people.

It is the second edition of Playford’s Look ‘n Cook Book, according to Amy Godfrey, Disability Access and Inclusion Coordinator. “Back in 2006 we released the first Look ‘n Cook Book in response to community consultation on our Disability Access and Inclusion Plan,” she said. “We recognised a gap in facilitating greater opportunities for independence in cooking activities within our groups.”

Consultation revealed a need for more accessible communication and resources, with simple language, symbols and pictures, to enable greater participation in everyday activities for people with a disability and reduce the need for support in these activities.

“We are still receiving similar feedback today and continue to get calls from the community to release more recipes,” Amy said. “This demonstrates there is still a gap for this type of resource, so we decided to revisit the recipe book and modernise it with the help of the Playford Friends Group.”

Participants in the Playford Friends Group tested all recipes to make sure they are easy, tasty and fun to make. Matt is one of four participants from the group who features in the video series.

Matt is proud to star in the video series, according to his mum, Marianne.

After filming he couldn’t stop talking about the video, I’ve seen his confidence grow, he’s trying new things and he views himself as a mini celebrity.

Since participating in the video series, Matt’s skills and confidence in the kitchen have increased. He has started cooking meals at home and has even cooked for his girlfriend.

The Look ‘n Cook Book and video series was released in early September. Thanks to the sponsorship of Feros Care and Industrial & Constructive Scaffolding, Council has been able to increase its reach, making the recipes available to more people.

Purchase your copy of the Look ‘n Cook Book for $10, with all sales funding future Playford Friends Group projects and activities.

For information on how you can purchase the ‘Look ‘n Cook Book’ or to watch the video series, visit: Look 'n Cook

Watch Matt in the first episode of Look 'n Cook, where he teaches us how to make tacos.