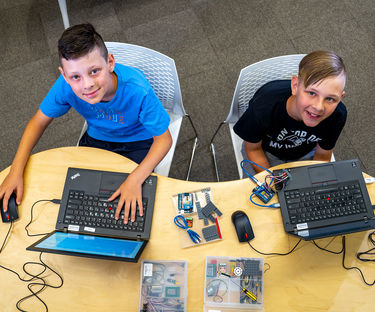 Share this article
Craigmore brothers Izak and Eli Scherer have been regular attendees of the Playford Library's STEAM Club since the program commenced in 2019.

Craigmore brothers Izak and Eli Scherer have been regular attendees of the Playford Library’s STEAM Club since the program commenced in 2019.

Izak, 12, is a keen coder while his younger brother Eli, 9, enjoys the creative side of STEAM (Science, Technology, Engineering, Arts and Mathematics), with a passion for design and art.

During sessions I’ve been exploring design programs like stop motion animation, as I enjoy ﻿the creativity. My grandpa even built me a stop motion rig to make it easier to film.

For Izak, STEAM Club is all about further developing his coding skills. “The current project I am working on is a video game, which I am really looking forward to playing afterwards.”

According to Izak and Eli’s father, Andreas, the boys have always been involved in the library which is how they initially heard about STEAM Club. “My wife has always been very much connected to both the Civic Centre and Stretton Centre libraries, bringing the boys to different programs and activities throughout their lives,” he said.

Both brothers have a clear passion for STEAM which they hope to pursue a career in. Izak would like to explore software engineering or becoming a game creator, while Eli is interested in becoming an audio engineer as he loves music.

A new initiative at the Stretton Centre in Munno Para will see the Playford Library deliver a range of STEAM programs to support the development of new skills, connections and exposure to employment pathways in STEAM for people aged 10 and up.

To learn more about STEAM programs on offer visit: playford.sa.gov.au/steamhub.