What question ‘megged’ an Adelaide United star at a school visit? 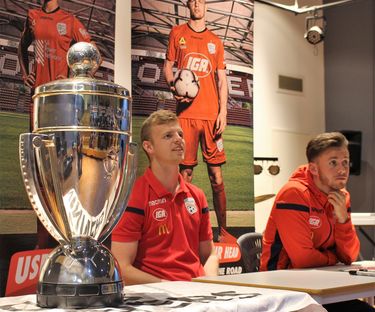 Share this article
When sports stars visit schools they can always guarantee a curly question from one of the students.

A visit by Adelaide United players Jordan Elsey and Lachlan Brook to Playford International College recently was no different.

The pair visited the Elizabeth-based secondary school to show off the Reds’ most recent acquisition, the FFA Cup trophy won in an exciting night at Coopers Stadium when they defeated Sydney FC 2-1.

The visit was part of an ongoing relationship shared by the AUFC (which has its training base at Elizabeth), the school and the City of Playford, which helps to develop sporting and other opportunities for local schools.

Students enjoyed an opportunity to score some autographs from the players, who both got their starts in Adelaide’s northern suburbs, and have their photographs taken with the impressive FFA Cup.

But, it was the visit’s Q & A session that had the best response.

Kicking off the questions was an enquiry about the FFA Cup after party.

Elsey was happy to say the party celebrations were a little off tap – “you don’t win a trophy every day”.

Brook then became the centre of much attention amongst the teenagers when he revealed that he was just 17.

Between the laughs Elsey revealed that his ambitions of playing for the Socceroos are still ever present, citing the example of team-mate and former Munno Para Soccer Club junior Craig Goodwin as inspiration.

“It doesn’t matter what league you’re in, as long as you play well you’ll get noticed,” he said.

And…what was the question that ‘megged’ Elsey?

“How did you deal with the situation when you were injured and you were going to be let go by the club?”

After initially being surprised by the teenaged enquirer’s revelation of having inside sources at the club, Elsey reinforced the importance of persistence and resilience to the students.

“You work harder,” he said.

“If you get told you’re not going to make it you have to work harder and prove them wrong.
“It’s a cliché, but that’s how it works.”