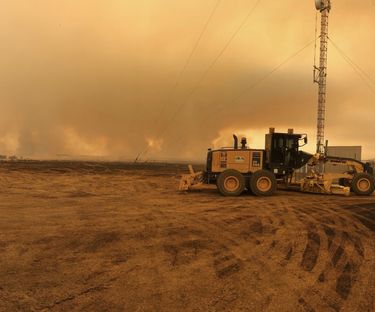 Share this article
In December 2019, three bushfires across the Adelaide Hills and on Kangaroo Island threatened land, homes and lives.

“That was probably the longest hour of my life.”“The day started like any other day would start, chaotic and hectic.”

This was Lisa Cavanagh, a manager at the City of Playford, as she described one of the most intense experiences of her life.

Lisa was part of a convoy of Council staff who assisted as three bushfires across Adelaide Hills and on Kangaroo Island threatened land, homes and lives.

She was responsible for coordinating ground crews clearing and repairing roads, as well as establishing fire breaks.

“The CFS were worried about the weather this day and true to form we got a call saying the wind had changed for the worse and the fire front was heading towards Parndana,” Lisa said.

Her crew unable to return back to base as a ferocious blaze approached them near Parndana on Kangaroo Island.

This is Playford: Bushfire crisis response

More than 20 councils across the State were involved in response to the bushfire crisis through the Local Government Function Support Group.

With access to trained personnel and plant equipment, Councils played a vital role.

Derek Langman from the City of Playford also supported during the emergency as he worked with the lead agencies.

“We were known within incident control as the team that could get things done,” he said.

“Our processes, our communication were developed and we had enough local government people who responded to the call to support that meant we had the resources to do something and actually make a massive difference.

“It gives me a real sense of assurance that when things go wrong we are set up in this country to respond quite quickly and there are professionals that can help and get things done.”

In times of crisis, people and organisations ban to support those in need.

Local Government was no exception.

This shared experience, amidst the tragedy, united communities.

“We all worked together as a tight knit group and you know that was 23 councils at times, at different times, working together. It was quite an achievement from day one walking in strangers and walking away part of the family,” Lisa said.