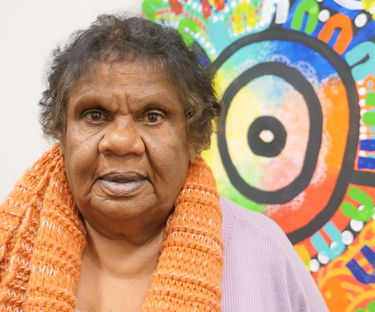 Share this article
Today marks National Sorry Day, a day that remembers and acknowledges the mistreatment of Aboriginal and Torres Strait Islander people who were forcibly removed from their families and communities, the Stolen Generation.

Aboriginal and Torres Strait Islander readers and viewers are advised that the following content may contain information that is distressing.

Today marks National Sorry Day, a day that remembers and acknowledges the mistreatment of Aboriginal and Torres Strait Islander people who were forcibly removed from their families and communities, the Stolen Generation.

In 1953 at just a few days old, Louise Rankine, was taken away from her family and land.

After giving birth to Louise and her twin brother who sadly died, her mother went back to the Mission to make funeral provision for her sibling. Missions were reserves of land where Aboriginal people were forcibly relocated. On her parents return to the hospital to collect their daughter, she was gone.

Louise was taken by police to a baby’s home in Adelaide and then fostered from 15 months old to a non-Aboriginal family and lived most of her younger years in Stansbury, Yorke Peninsula.

As a Stolen Generation Survivor, the Government stripped her of her connection with family, land, language and customs.

“I think I have overcome a lot that’s impacted me, through my resilience, my strength and my knowledge,” she said. “A lot of our people haven’t got that.” Aunty Louise’s pain with regard to the ongoing intergenerational trauma that this has caused family and community remains palpable.

“I would love to go back and reconnect with the land, I know some stories, but to just go back and listen to the birds up in the Flinders is beautiful,” she said.

However, one thing that remained strong throughout her life was her connection to culture.

“Culture is a very, very special thing – you can ask me about my culture, but that’s in here,” Louise said as gesturing to her heart. “That’s what molds me.”

It wasn’t until Louise was 21 that she reconnected with her family after finding them through a woman she was living with.

“I finished my nursing and went here for a course at the Institute of Technology – Aboriginal Taskforce,” she said. “I was staying at Luprina Hostel, a place where us Aboriginal girls could live while we were studying in Adelaide, and this Aboriginal girl said ‘I think I know your family Louise’ and I said ‘well let’s go’.”

Louise caught a bus to Port Augusta, where she met her brother and his wife for the first time.

“We went up to a place called Oraparinna and there was my mum, dad and my aunty,” she said. “Lots of hugs and touching and holding hands. “We just sat around the campfire, ate very traditional food – it was eye-opening to me. “It was lovely up there.”

Louise’s father was an influential man in the Adnyamathanha culture, a connection she said despite being taken, never left her.

“I could feel his presence and him telling me a lot of things about Adnyamathanha culture and I’ve lived it, I’ve learnt a lot.”

This survivor’s resilience is undeniable, she has dealt with many challenges throughout her life as an Aboriginal woman.

From raising her children out of fear of welfare taking them away to now dealing with the impact of intergenerational trauma.

Colonisation and the violence and loss associated with the experience and other historical injustices is affecting First Nation families and communities for generations.

“Our Aboriginal kids are experiencing racism every day, how can we tell non-Aboriginal people about that when they don’t even experience it,” she said. “It’s about getting our kids and everybody feel good about themselves. You need to be good in your space and you need to not let everyone come into that space that’s not good for you.”

Aunty Louise plays a pivotal role in the local community by educating people through her stories and experiences.

“The Kaurna people have accepted me to be here on this country, but this is not my country,” she said. “I belong in the Flinders, but I share my culture, I tell them my stories and hopefully it makes them stronger.”

She said acceptance, awareness and education of our true history is vital, as well as good strategies developed to tackle the issues faced by Aboriginal people today.

“The Government needs to get more instruction, more community involvement about things like that – we know what we need,” she said.

Sorry Day asks us to acknowledge the Stolen Generations, and in doing so, reminds us that historical injustice is still an ongoing source of intergenerational trauma for Aboriginal and Torres Islander families, communities, and peoples.