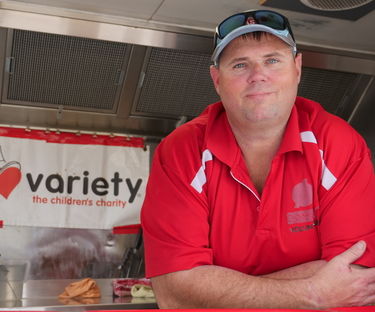 Share this article
Captain Hulk, also known as Anthony Hill, has been named the 2022 Playford Citizen of the Year.

Captain Hulk, also known as Anthony Hill, has been named the 2022 Playford Citizen of the Year. Since a young age, Anthony has participated in the Variety Bash which brings together a group of mates on an eight-day outback drive for the children’s charity. About five years ago, Anthony created his own team – the Avengers – and continues to raise money for the charity on and off the dirt track.

“I think it’s a necessity to give back to your community,” he said. “There are so many people in the community that don’t have the facilities to do what we do. There are so many children that need what we do and someone has to do it. So my wife and I saw there was a need there, put the car together and stepped up as a team and got it all together.”

During this time, Anthony has helped to raise over $100,000 for the charity. When he isn’t in the Bash car, the Avengers team is at local community events bringing entertainment and cooking delicious food.

These events are often to support or raise funds for both Variety and other organisations or groups that focus on children and their families who are facing many challenges through sickness, disadvantage or living with special needs. “There have been families in real struggle that have needed a lot of assistance that we have been able to help,” he said.

Anthony said he was honoured to be awarded Playford Citizen of the Year, however, it was a team effort. “It’s more about the recognition for the team,” he said.