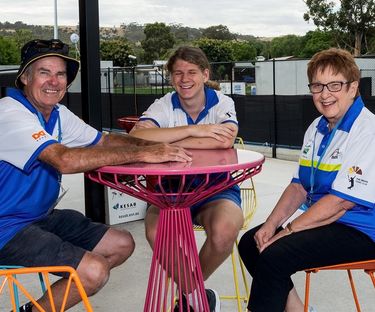 Share this article
One of Playford’s finest sporting ambassadors has declared game, set and match on a glorious career - and taken home the State's biggest sports volunteer award as she exits.

And as she departs, Gloria's dedication and contribution to sport in SA has been recognised with the Volunteer of the Year Award at the SA Sports Awards presentation held on 22 November.

During Gloria's tenure there has been much change in the local tennis community, which began when she moved to the area in 1970.

The club was originally named Elizabeth, then The Grove and now Playford, while Gloria was also involved with the development of the club’s previous home the Bicentennial Tennis Centre and its current home, the Playford Tennis Centre.

Gloria has tried to retire once before, but the opportunity to help her club take the next step in its history brought her back for one more shot – the move to its current Elizabeth East site.

“I’ve always wanted to do something to raise people’s perception of Elizabeth and this tennis centre can do that, this community is worthy of having a facility of this magnitude,” Gloria said.

“It’s not just about the tennis for me, it’s showing that something really good can happen in Elizabeth.

“I feel that tennis has been a way I can raise the profile of my community.”

There have also been personal benefits to being involved in the sport she loves.

“It’s the physical activity, it’s a chance to work towards a goal. I’m quite competitive,” Gloria said.

“I also think it’s very good for your mental health and the interaction socially, the feeling of belonging, of being involved in a team or club is beneficial.”