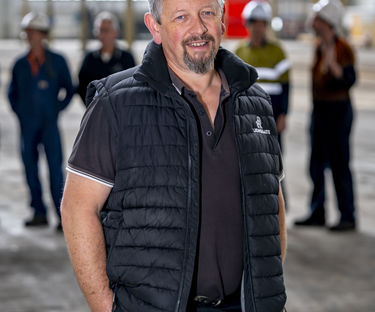 After migrating to Adelaide on 8 April 1994 from Ireland, Paschal was employed with Holden as a Press Operator on 24 May. “I came to Australia for the opportunities, and chose to settle in Adelaide due to the booming car manufacturing industry at the time,” said Paschal.

As a qualified Mechanical Engineer Paschal was willing to start from the shop floor as a Press Shop Operator as he could see the future opportunities available to him, and was willing to work his way up. He gained experience working as a Planner across a multitude of areas in the business, from maintenance to stamping, and undertook sponsored training to complete his Masters in Engineering.

The opportunities didn’t stop there for Paschal who in 1999 was sent to America for four months to visit General Motors Technical Centre in Detroit. On his return he secured his dream job, Lead Stamping Planner for VE Commodore

“It was an absolute golden time for all involved,” recalls Paschal. “It was brilliant – we built a brand new car from the ground up, never before had we done that in Australia. “It was no one else’s design, it was all ours.”

From 2007 Paschal moved into Operation Manager positions for various areas of the business, which eventually led to his final role with Holden as Central Engineering and Facility Manager. It was in this role that Paschal first met Ross Pelligra, Chairman of the Pelligra Group, who would become his boss at Lionsgate.

“In my final role one of my responsibilities was facilitating the transition of the site to a new owner, which included providing tours of the site and any information potential buyers required,” said Paschal. “This is how I first met Ross, and I often joke began the most thorough and longest job interview I’ve ever had.”

Today Lionsgate is home to a range of manufacturers and on any given workday approximately 750 people are on site with this number anticipated to grow to 1,500 in the next three years. Paschal’s role is to support this growth.

“Manufacturers are drawn to Lionsgate because of its capabilities, which is a legacy of the Holden site,” he said. “We have a 122 hectare site, with engineered warehouses that provide tenants a wide range of manufacturing opportunities. “You can access any power requirement you want, hang heavy items from the ceiling trusses with no problems, and the floors can hold heavy masses.”

If we do this right and capitalise on our existing manufacturing capabilities, both people ﻿and infrastructure, Playford’s manufacturing industry is set for the next 20-30 years.

Pelligra have made a significant investment in Playford purchasing Lionsgate and four additional incubator sites in the region as they see the industrial capabilities and strengths of the area.

“I think we are uniquely positioned at Lionsgate, and our surrounding incubator sites to take advantage of the work that is coming from the naval shipbuilding industry at Osborne thanks to our close proximity to the Northern Express Way,” said Paschal.

After working at the site for 27 years, Lionsgate is like a second home to Paschal. “This site is special to me because of all the fond memories I have of working here - the people, processes and products.”

Paschal isn’t the only ex-Holden worker employed by Lionsgate, in fact all 12 Lionsgate employees were employed by Holden and have a combined 280 years’ experience working at the site.

For Paschal the future of industry looks bright for Lionsgate Business Park and Playford. “If we do this right and capatalise on our existing manufacturing capabilities, both people and infrastructure, Playford’s manufacturing industry is set for the next 20-30 years.”