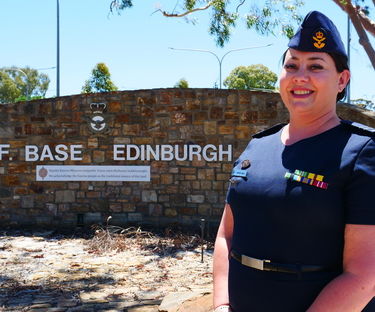 Share this article
Flight Lieutenant Natalie Giles punched the F/A-18B ﻿through the sound barrier, leaving a sonic boom in ﻿her wake. Strapped in the seat behind the pilot, she ﻿was handed the controls of the $70 million warbird for ﻿a hair-raising flight 20,000 feet over Australia’s east ﻿coast.

Flight Lieutenant Natalie Giles punched the F/A-18B through the sound barrier, leaving a sonic boom in her wake. Strapped in the seat behind the pilot, she was handed the controls of the $70 million warbird for a hair-raising flight 20,000 feet over Australia’s east coast.

“We flew at twice the speed of sound. You’re flying so fast you don’t hear the sonic boom until the pilot tells you ‘we just broke the sound barrier’,” said Flt Lt Giles, who grew up in Adelaide’s northern suburbs. “We pulled 8.5Gs in some tight turns and then finished off with a coastal run off RAAF base Williamtown (air base near Newcastle).”

The exhilarating hour-long sortie was a 77 Squadron tradition to farewell operational clerks who were moving to their next posting. Over more than 20 years in the Royal Australian Air Force, Flt Lt Giles’ career has taken her to the skies over Australia, supporting the COVID-19 and bushfire responses and to multiple deployments in the Middle East.

On Anzac Day, she will pause to reflect on the sacrifices made by defence personnel before her and the impact war has on society. “It seems more important than ever that younger people attend the services to understand the lessons of the past, particularly given the state of the world at the moment,” she said.

Flt Lt Giles returned home to Adelaide last year to work as a Public Affairs Officer at 464 Squadron at RAAF Base Edinburgh. She has left the RAAF fulltime service but is continuing to work three days a week as a reservist.

Flt Lt Giles was the first member of her family to join the Australian Defence Force, inspired by serving her country. “I had a level of pride joining the defence force. I love wearing my uniform but what I’ve noticed even more is how proud my family are of me,” she said. “A lot hasn’t changed as a reservist. I still feel part of that defence community and I’ve made some brilliant friends who are like family to me.”