Growth on the Plains. 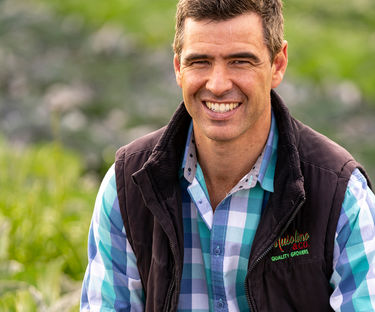 Chris Musolino, Managing Director of Healthy Heart Produce is a third-generation farmer on the Northern Adelaide Plains, following in the footsteps of his father Gino, and grandfather Tom who established T. Musolino & Co.

According to Chris becoming a farmer was a natural progression after completing school.

“During the school holidays I would work on the farm alongside my brothers, and cousins so it was natural that this was what we were going to do, however we have each put our own stamp on the business.”

In 2016 Chris put his mark on the family business, diversifying into the production, packaging and distribution of innovative vegetable rice, primarily cauliflower and sweet potato rice through Healthy Heart Produce.

The inspiration to diversify came to Chris while visiting his sister-in-law. “I arrived to find Katrina in the kitchen surrounded by an absolute mess,” After learning that she was making cauliflower rice, Chris said to her, “imagine if I could take the mess out of cauliflower rice by making it ready-to-go.”

This inspiration lead to a simple to use and healthy product that is now distributed nationally and throughout South East Asia.

Recently Healthy Heart Produce received more than $500,000 from the Department of Primary Industries and Regions for the development of a new climate-controlled food processing facility which will create ten new jobs.

The facility will enable us to cut and process in-house instead of contracting out and provides local industry an opportunity to process their oversupply locally.

Chris worked closely with the City of Playford’s economic development hub, the Stretton Centre, to apply for the grant. “The Stretton Centre has been amazing, without their support there is no way we would have received this funding,” Chris said. “They have been instrumental in realising my ideas over the years.”

According to Chris the Stretton Centre has been instrumental in supporting the business to develop and grow over the years.

"I've had the ideas but without the Stretton Centre I wouldn't have the opportunities," said Chris. "They have made me aware of grants I may be eligible, supported my grant applications, provided valuable connections and acted as a sounding board."