Get you hands dirty with Bill 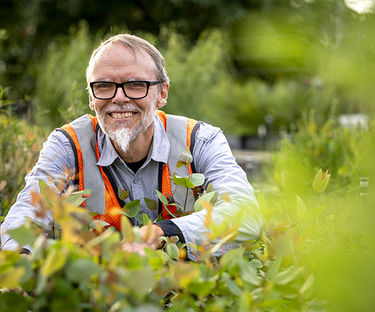 Share this article
Bill has been our Revegetation Officer since 1998, and over those 22 years he’s had the opportunity to literally change the landscapes of Playford...

Bill has been our Revegetation Officer since 1998, and over those 22 years he’s had the opportunity to literally change the landscapes of Playford. Bill estimates he’s personally planted thousands of native plants in Playford and helped coordinate hundreds of thousands more.

Over the last few years, Playford has also distributed thousands of seedlings to new citizens at Council Citizenship Ceremonies to encourage native plants going into backyards.

This year Bill will distribute the 250,000th tube-stock seedling to our Buffers to Bushland rural revegetation scheme in June.

The first one he planted in Playford was on a mound adjacent to Curtis Road.

“I suspect it was a Ruby Saltbush, as we planted a lot of them that day, and I believe some of them are still there. So, if they are there, and they’re still thriving, they’re clearly the ones I planted!”

He smiles wryly, and says “actually, that’s a joke. Enchylaena doesn’t live that long, so plants there now can only be descendants.”

Bill is very passionate about how our natives contribute to a sustainable environment and is thrilled he’s working with a council who ‘gets it’.

“Playford has been ahead of the curve for over two decades, and the existence of my position proves it! I believe we are unique among Adelaide councils in using volunteers via the Playford Greening and Landcare community group to provide species for revegetation across the council district, including in schools and on rural properties.”

Bill would encourage anyone living in Playford to embrace a native garden, because local natives are species that already provide food and shelter to our local bird, animal, and insect populations.

﻿“There’s such a diverse range of local-native species, and with more than 500 locally and 1,000 in the Adelaide region, there’s a plant suitable for almost any landscape purpose that can be imagined!”

Local-native plants used to grow in Playford before colonisation, so they’re already well adapted to our climate, rainfall, and soil conditions, and generally require little attention to thrive (except a nice watering to get them through the first Playford summer).

If you’re interested in looking into growing a native garden, check out or Environment page, where you'll find a link to information on how to create a wildlife friendly garden, and to the state government’s native plant selector tool.