Get to know Mayor Glenn Docherty 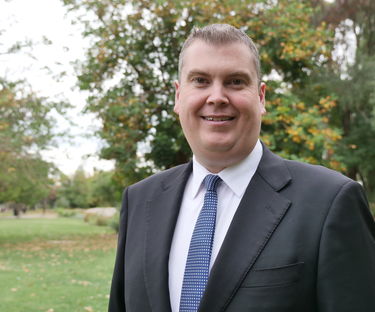 Share this article
Mayor Docherty is a dad, a registered nurse, a volunteer and the Mayor of the City of Playford.

City of Playford Mayor Glenn Docherty has served his community since the young age of 13, when he first joined the St John Ambulance Cadets.

Growing up in Playford, Mayor Docherty said as a youngster there were plenty of opportunities to get involved.

“I think Playford has such an array of wonderful opportunities for young people to volunteer, whether that is within emergency services, service clubs or sporting organisations,” Mayor Docherty said. “It really is fantastic, and for me I made friends, had the opportunity to develop many skills and do many things that I wouldn’t have done, if I hadn’t volunteered.”

These professional and socials skills put this young man in good stead to pursue a career in nursing, a vocation where he now works at the Lyell McEwin Hospital.

“It was just a progression of making sure I could do what I really enjoy, which was the health and medical field, and to be able to do that close to home in a world class hospital,” he said. “You are playing a small part in people’s lives to get them back on their feet, so it’s a great job and one that’s varied – whether you are working in the ICU or the Emergency Department – there is so much that happens in the nursing space that you can really play a great part in people’s lives and build that connection.”

Get to know Mayor Glenn Docherty

His continued leadership presence at St John Ambulance Cadets and the Playford Youth Advisory Committee, saw him announced as Young Playford Citizen of the Year in 2002.

It was this achievement which encouraged him to progress his political career in Local Government.

At 19, he was first elected to the City of Playford as one of two councillors in Ward 6. He served as a Councillor until November 2010, when he became the third and youngest mayor of Playford.

“I had a bit of a think about it, I was at university at the time and I thought why not,” he said. “I didn’t have much money, bought some new shoes and went door knocking delivering an A4 pamphlet. “As they say the rest is history.”

Since those early days as a Councillor and to now Mayor of 11 years, Mayor Docherty said he continued to learn from his community.

“The community is a living, breathing organism and community perceptions and ideas change, but most importantly the fundamentals are the same,” he said. “We want a safe and happy community, we want a community where there are jobs, opportunities for our young people, we want a healthy and active community, and we want a place that looks nice.”

With a community of over 97,000, Mayor Docherty said the greatest voices are our people who shape the city’s future.

“There is so much to look forward to here in the City of Playford – whether it is developments in our CBD, health or sport precincts, the revitalisation of many parks, gardens or reserves, or the growth in our new suburbs and housing developments coming online – there is so much to look forward to,” he said. “Our community is rapidly changing and one that is also providing jobs and economic security to the people here. “Playford is an exciting place and one that will help shape the future of Adelaide and South Australia for many years to come. “It truly is a place I want to raise my family in and the opportunity for all of us to live the lives we want to, right here in our local community.”