Get to know Councillor Clint Marsh 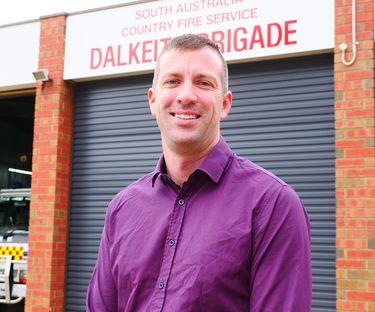 Share this article
Cr Clint Marsh is ambitious, honest, a leader, a volunteer and a Councillor for Ward 1 in the City of Playford.

Councillor Clint Marsh moved to Playford when he was a young boy after his parents chose the family lifestyle.

And much like his parents decision then, Cr Marsh has grown his own family here for the opportunities available to them.

“The open space, sporting options and the lifestyle really suited my family,” Cr Marsh said. “I am comfortable, we’ve got a good living. “We really like where our foundations are and we like the local schools.”

Cr Marsh is an active member of the community having volunteered in the CFS for 15 years.

“It was almost my number one focus in life because of the career aspects that I could see you can get out of being a member of a professional volunteer organisation,” he said. “I came in as an active fire fighter responding to front line situations from road crash rescues to structural fires through to the rural activities, which the CFS is really known for.”

He pursued a leadership role educating the community on fire safety, as well as becoming the Captain of the Dalkeith brigade.

“It's a full time job being in charge of a brigade, 500 calls a year this brigade does,” he said. “I led this brigade through a transition supporting the changing environment of rural to urbanised fringe approach onto land that was once farming. “So the direction of the brigade had to change, I was excited by that change.”

And much like the change he has seen through the role of CFS, this has been reflective of the growing community he now advocates for.

Get to know your Council | Councillor Clint Marsh

Cr Marsh was elected for Ward 1 in the Local Government more than three years ago.

“You can go up to the hills where it’s rural, if you want the comfort and lifestyle of living on an acreage,” he said “If you want a bit of an urban mix – high, medium or low density - you come to the flats. “And if you want farming, you only have to drive five to 10 minutes and you are in the Virginia and Penfield area. “It is so unique that within your own boundaries you’ve got various different lifestyles.”

Cr Marsh said as a Council it was important to be ambitious while respecting all corners of the diverse community.

“Number one is grassroots infrastructure, until such a time that we get our grassroots infrastructure in place, then happy to go bigger and better,” he said “I am very focussed on street scaping with the introduction of zero net loss of trees within the City of Playford. “I like that we have invested in verge maintenance which is a core service that supports our community’s vision. “For someone to walk out of their front yard onto a safe footpath safe and down a clean street.”

He said there are many challenges with being a growth Council, however with those challenges comes opportunities.

“An all-inclusive and accessible community that links to facilities and services, meaning that the new areas and the older areas must connect with one another and must become one community, integrated with each other,” he said. “So to be connected and most of all really have fun, we really are a vibrant community.”