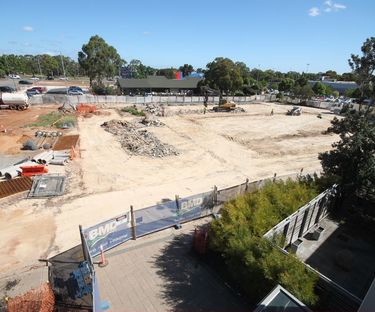 Share this article
Construction has begun on Prince George Plaza, soon to be the heart of the Playford City CBD.

The plaza will feature enhanced digital connectivity, such as free Wi-Fi, and smart infrastructure to create a community meeting place.

It will also feature key elements from the old Windsor Green fountain, and will be a centre for commercial, retail outlets, arts and entertainment.

City of Playford Mayor Glenn Docherty said the Playford City CBD is an exciting new chapter in the ongoing growth of the north.

“It will provide business, development and cultural opportunities for residents of the City of Playford and beyond,” Mayor Docherty said.

“It’s all part of our City’s vision to deliver a Smart City and provide jobs for the future in our community.”

The Playford City CBD is located between Fremont Park and the Elizabeth City Centre, with Prince George Plaza being built on the site of the of old Playford Civic Centre car park.

Underground works of the CBD have already taken place, with the development of an internal road and installation of a temporary car park. An upgrade to the streetscape and road surface of Playford Boulevard will also be completed as part of this stage in the development.

Prince George Plaza is due for completion in the middle of this year, with the first confirmed private development to begin construction soon after, including a potential hotel and commercial office spaces.

Proposed developments at the precinct include a $20-million medical hub, and a $35-million Playford Arena ice sports and entertainment centre funded by private developers.

Playford Civic Centre and Grenville Community Connections Hub will be open for business as usual throughout construction.

The normal car park at the Civic Centre is closed from 15 February 2017.

A new temporary car park is located on the corner of

Main North Road and Philip Highway, which can be accessed via the newly constructed road on Playford Boulevard.

Refer to the map below for further detail on access points. Red X’s represent blocked-off entry points during construction.