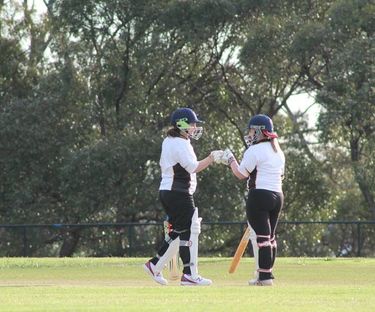 Angle Vale Cricket club's Michelle Skellend (left) and Merrilyn Pfeiffer celebrate a boundary during their team's historic first win. The Angle Vale Cricket Club took a historic step last week when its women’s team played its first match, defeating Para Hills by 101 runs.Playing in the Para Districts Cricket Association, the City of Playford-based club started its women’s side in the B grade competition, but the resounding victory saw the new team quickly upgraded.Even more meritorious is that the match was played on turf, a foreign surface for most of the women, who would have previously only encountered hard wickets.Inaugural captain Chantell Bandtock said that despite humble beginnings, there has been much interest in the new side.“We had a registration night and, I think, we had six or seven girls there and we’ve had more sign up since,” Bandtock said.“I think it’s looking good for next year.”Bandtock said the club has really got behind the new team, ensuring it has ample playing kits and all the resources needed to get onto the ground.Starring in the historic first game were Aishlin Killeen, Merrilyn Pfeiffer and Michelle Skelland, who all retired on 30, as their side tallied 128.Killeen was also a star with the ball as Para Hills was dismissed for just 27. With the season well under way and the ladies getting a taste for the game, Bandtock said the club’s aims were simple.“The majority of players have played before and understand cricket, but there are some who are fresh to it and one of the main aims is to get them feeling more confident in their batting and bowling,” she said.“Hopefully, we get a few wins under the belt and make the finals, but we also would really love to have two teams next year.”The club starts its second game, playing against Sandy Creek, tonight.To learn more about the Angle Vale Cricket Club find their Facebook page.