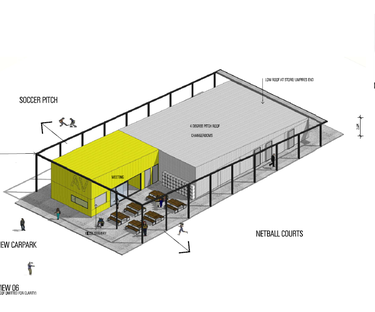 Share this article
Women’s sport in the Angle Vale area is set for a boost with the construction of a $1 million change-room facility.

Women’s sport in the Angle Vale area is set for a boost with the construction of a $1 million change-room facility. ^ The City of Playford is building a new change-room facility at Angle Vale as part of the 2017/18 Annual Business Plan. The facility features in the Angle Vale Community Sports Centre masterplan and will be built to service the existing netball courts (six) and a future junior oval/pitch to be shared by Angle Vale’s soccer, football and cricket clubs.All four clubs currently share a single club-room building that also features two sets of home and away change rooms.

City of Playford Mayor Glenn Docherty said the facilities will make a major difference for the sports centre’s users.

“Angle Vale is a rapidly growing community and this development will, importantly, provide facilities for netball, football cricket and soccer participants to change in before and after sport,” Mayor Docherty said.

Mayor Docherty said the provision of change facilities at the courts could cater for a 30 per cent increase in participation in netball at Angle Vale. READ:Playground upgrade New car park Women's cricket

The City of Playford has allocated $500,000 to the project, with further funding provided by the State Government.

The project is in addition to $650,000 currently being spent to construct a new car park and storm-water basin to service the netball courts at the centre.