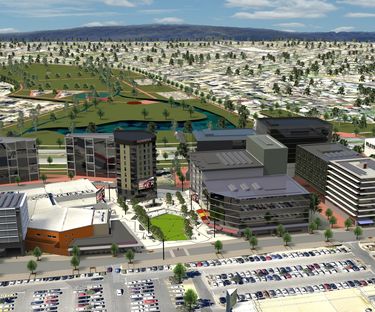 Share this article
The City of Playford is embarking on an exciting transformation of its CBD - a move that will bring more jobs and services to our region.

The City of Playford is embarking on an exciting transformation of its CBD - a move that will bring more jobs and services to our region. #SmartCity The first stages of the exciting Playford City CBD transformation are now taking place, with site works having commenced near the Playford Civic Centre.The site, located on the corner of Main North Road and Philip Highway, is being prepared for the creation of at least 10 new buildings, as well as a free WiFi network for the community.City of Playford Mayor Glenn Docherty said the buildings, a mix of retail, food and beverage and commercial properties, will also be supported by a new multi-storey free car park.This will be centred around the revamped Prince George Plaza, which will be located in the area currently occupied by the Civic Centre car park.The new plaza will also include the reinstated Windsor Green fountain and work on this project is expected to start before the end of this year.“A series of exciting activations for Prince George Plaza are being planned by council to launch what will be an outstanding community facility,” Mayor Docherty said.The redeveloped plaza will not only provide the community recreational and entertainment space, but will produce many employment opportunities for local people.“Several commercial operators have already expressed interest in becoming part of Playford City’s exciting new centre, including a 10-storey hotel, providing much-needed high-quality accommodation for the region, and a new recreational centre focused on ice sports and rock climbing, and a new medical centre,” Mayor Docherty said.Meanwhile, Grenville Centre members will be relocated as part of the redevelopment, but the existing centre will not be closed until its new facility is ready.The City of Playford has been working closely with the Grenville Centre’s members to plan for the move to the new facility.“All of these new buildings are being created to drive investment in the Playford area, creating a new destination for locals and visitors, whilst creating the opportunity for hundreds of new jobs over the construction period, as well as the ongoing employment the new commercial ventures will provide,” Mayor Docherty said.“There will be some changes to road and footpath use during the development process, and council and its contractors will inform the community in advance of any planned temporary road and footpath closures, and any impacts to public transport routes.”For more information about the new Playford City CBD, visit playfordsmartcity.com.au, or join the conversation on our Facebook page. *This article first appeared in North Is Up, which you can read in full here.