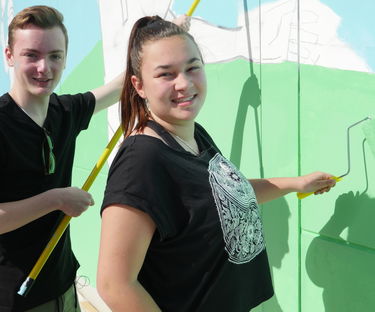 Share this article
A wall has become the canvas for a prominent art piece in Elizabeth East.

A wall has become the canvas for a prominent art piece in Elizabeth East. ^^ Students from northern suburbs schools have nearly completed their art work on a prominent wall at the Playford City Tennis Centre. Photo: Kate HaywardThe mural, commissioned by the City of Playford for a hit-up wall on the Playford City Tennis Centre’s community courts is an artistic hit.Adelaide artist Rohan Fraser worked with northern suburbs school students to create the mural.

The students, who are part of the Northern Adelaide State Secondary School Alliance, helped design the piece and then, over several days, contributed to its creation.

The art piece reflects the diversity of our community in terms of culture, gender and ability.Work will continue on the wall next week and is expected to be completed by the end of the month.