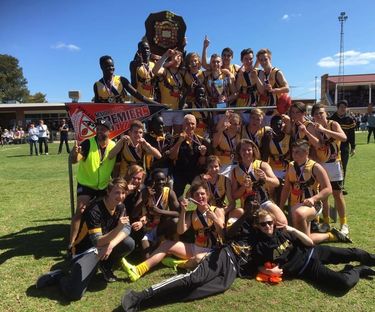 The Angle Vale Football Club recorded its first premiership in any grade in the APFL, having joined the competition in 2016.

The Owls’ senior colts were favourites against Virginia and never looked in danger of suffering an upset, winning by 82 points.

Five goals in each of the first two quarters put the game beyond doubt, as the Rams were held to just four goals for the match.

After six goals in the semi, Ryan Humphreys bagged four majors in the premiership decider.

In the following game, Virginia recorded its third-straight premiership in its eighth-straight grand final, defeating Mallala by four points.

The Rams have now won five of the past eight APFL reserves flags, this time coming from behind to take the win.

Trailing the Magpies by seven points at three-quarter time, Virginia had a weight of opportunities but could not make the most of them until the final term.

In the end, a 4.3 final term saw the Rams home, with Justin Platt kicking three goals (to end the season two majors short of the century).

Best for the Rams were Hayden Ingram, Sean Hee and Christopher Motley.