Variety the spice of a hero's life 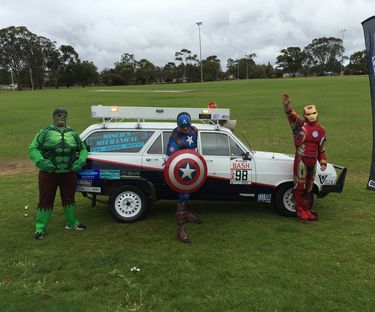 Share this article
&nbsp;When we're kids, we all want to be superheroes.

When we're kids, we all want to be superheroes.

It's a world where Superman, Batman, Wonder Woman and even Wolverine *snickety snick* are the headline acts.

But when we get older, those dreams fade...or do they?

Not for Craigmore man Anthony Hill who is conducting an extreme fundraising regimen to become The Hulk.

And it was here that he found a like-minded partner, Bronwyn, the daughter of former Munno Para Council elected member Brenton Henschke.

Between them, the pair is a force to be reckoned with when it comes to fundraising.

While, metaphorically, the pair are superheroes, Anthony also has a crew of mates ready to don capes and leggings for a good cause.

Anthony, whose alter ego is The Hulk, has been joined by mates Dave Pannell (Iron Man), also of Craigmore, and Queensland-based former South Australian Matthew Addicott (Captain America) to form The Avengers and the trio will be taking part in next August's Variety Bash.

"We had to go through IVF to have our son and we had a lot of support," Anthony said.

"But we know there are so many families, whose children are ill or need support, that just don't get that help. We just wanted to help them."

The trio will be heaving around the back blocks of South Australia, driving from Mount Barker to Mount Gambier, in a 1976 HR Special - for the car nuts, it's a heavily modified Aussie four-speed road-registered 202 Red with a roll cage.

If you've seen a Variety Bash whip past in convoy, you'll know these guys are going to have a good time.

"We're getting to do something you wouldn't normally get to do and see - it's also some great time out with the boys," Anthony laughed.Despite all of that, it's a serious business.

Each Bash is routed around a variety of stops, where donations are handed out to local communities for worthy projects - in 2016, $2.66m was handed out in grants.

The Avengers, whose 'bus' will be part of this weekend's Playford Christmas Pageant, need to raise a minimum of nine grand to take part in the Bash.

But they've got bigger visions and want to raise $25K.

For most, that would seem a pretty big task, but Anthony knows how to get the help he needs.

The Eastern Park Football Club, Red Lion Hotel, Misch's Mechanical and J&S Quality Meats are right behind the team, as is a much larger support crew.

"We've got a team of volunteers behind us - family and friends ensuring this gets on the road," Anthony said.

Check out the calendar below for ways you can support The Avengers on their super quest and rest assured, every cent raised goes to kids who need it.