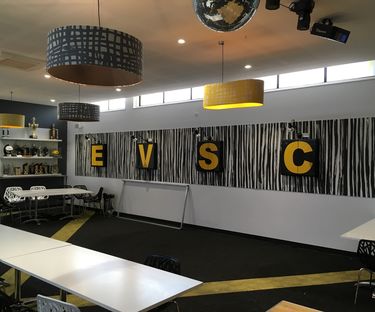 Share this article
The City of Playford has a wide range of sporting facilities, club rooms and ovals, all of which are enjoyed by the community and maintained by Council as part of its #SmartSports ideal.

The City of Playford has a wide range of sporting facilities, club rooms and ovals, all of which are enjoyed by the community and maintained by Council as part of its #SmartSports ideal.

Through the City of Playford’s assets management program sporting club facilities across the Council area are continuously receiving upgrades.

Formed in 1961, the Elizabeth Vale Soccer Club was the first organisation to have its club rooms upgraded by Council under the new assets management plan.With modernisation at the forefront of their plans, designers have updated the facility, improving the kitchen and bar area, while the rooms' furnishings now match the club’s colours of yellow and black. The Aquadome at Elizabeth is one of the most popular facilities in the City of Playford.

In recent times a new family friendly change room has been added, allowing mums and dads to more easily help their children as they get in and out of their swimming costumes.

Over 30,000 people visit the Aquadome each month. Over the past eight years, the City of Playford has spent nearly $1.2 million on upgrading the Eastern Park Football Club.

The Demons’ formerly tired and cramped club rooms have been expanded and a new kitchen and canteen installed to give members a more modern and bright facility, while oval lighting has also been upgraded. At Argana Park, the Elizabeth Netball Association clubrooms are receiving a much-needed upgrade and fit-out, thanks to the City of Playford.

Already the canteen has had a $26,000 renovation, with the main meeting room now getting a touch-up.

These improved facilities will allow the association to continue catering for the 3500 people who use the courts each Wednesday and Friday night. The Elizabeth Downs Soccer Club, also at Argana Park, is one of the best organised in Playford Council.

Members at the Downs have large facilities and make the most of them and will soon have a new veranda from which to watch games, with plans currently at the design stage. This is just a small picture of the facility upgrades undertaken by the City of Playford in recent years.

In the coming year more clubs will see their facilities upgraded.

At Dauntsey Reserve $270,000 is being spent on upgrading lights, while a further $300,000 refurbishment of the club rooms shared by the Elizabeth Grove Soccer Club and ATCO Cricket Club is taking place.

Meanwhile, $100,000 is being spent on access toilet and storage facilities at Central United Football Club, which is based at Mofflin Reserve.