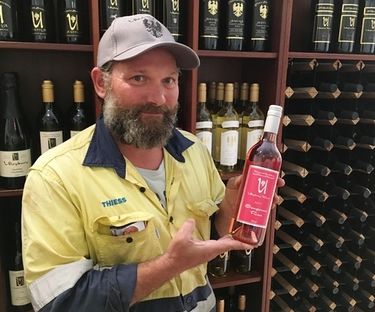 Share this article
If you listen to Uleybury Wines’ Anthony Pipicella, you get the feeling the recently completed 2017 grape harvest might just be the winery’s best yet.

If you listen to Uleybury Wines’ Anthony Pipicella, you get the feeling the recently completed 2017 grape harvest might just be the winery’s best yet. ^^ Uleybury Wines' Anthony Pipicella with a freshly bottled Rosè. Photos: Rob McLean Late rain during the growing season caused a challenge, however, Anthony said this crush could be the best since grapes were first grown at the property in 1995.

“We’re always excited about what we’ve produced, especially once you get to this point after the late nights,” he said.

Harvest at the Playford-based winery finished in April with yields up 25 per cent on 2016 and Anthony Pipicella is enjoying seeing the fruits of his labour hit the bottle. “Every harvest is the best ever,” Anthony said.

“But, 2002 was sensational and this one was very close to being the same, probably a little bit better.”

The winery took in 105 tonnes this vintage, with Rosè

Focusing on Rosè reflects the Australian market’s changing tastes, according to Anthony.

“A lot of people are starting to go away from the aged wines,” he said.

“Now people are saying that’s (aged wines) too old, there must be something wrong with it – which isn’t right.

“It’s just the younger crowd are starting off with Rosè and Moscato, which you usually have quite young.”

However, Shiraz still excites the tastes of the more seasoned wine drinker and Uleybury continues to bottle the cultivar for long-term cellaring.

Along with an appreciative domestic market, the winery exports to Denmark, Hong Kong, China and the United Kingdom.

“Probably our most successful market’s been Denmark,” Anthony said.

“Our client enjoys the aged big wines – he says, because it’s cold over there, ‘we need something to warm us up'.

” Why Uleybury? ^^ Sea breezes sweeping up to Uleybury makes the spot a wonderful place to plant vines.

The Playford foothills are not generally known for vineyards, but Uleybury Wines is helping to shift perceptions.

Anthony said the area, just north of One Tree Hill, provides the best of both worlds.

“We’re on the boundaries of the Barossa, Adelaide Hills and Adelaide Plains, so it’s not as hot as the plains, but not as cold as the Adelaide Hills,” he said.

The make-up of the soil includes limestone, meaning water drains quickly away from the vines, which is particularly important in a harvest like the one recently completed.

“If we do have rain pressure in that January period before we peak, the water drains away quite quickly so the vine’s not going to suck it up and start splitting berries and causing disease,” Anthony explained.

“From a climate point of view, for growing certain varieties it’s one of the best places.”

This season the winery has concentrated on producing Rosè and Shiraz for its own cellar, but Cabernet Sauvignon, Grenache and Petit Verdot have also been grown at Uleybury, some of which is sent to other wineries for blending with their product.

Uleybury Wines is one of three popular cellar doors within the City of Playford, with Tenafeate Creek Wines a near neighbour and Virgara Wines based at Angle Vale.