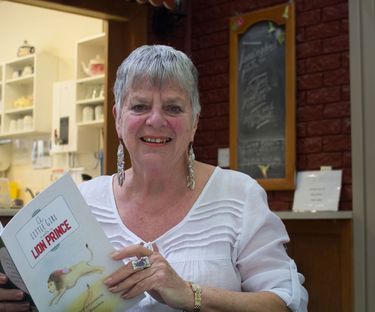 She’s light on her feet, can belt out a tune and now Alice Richardson is making waves for her literary abilities.

At 74, Elizabeth South local and Grenville Hub volunteer, Alice is publishing her first book, a children’s book that she said encompasses a fond, childhood experience.

“When my brother and I were little children, we used to walk to school through a paddock with tall grass and a curved path and sometimes he used to run off and leave me. He’d always wait for me on the other side but I said to him one day a lion might jump out and grab me and you’ll be sorry then,” Alice said.

While that big cat never appeared in the flesh, Alice has decided to bring the lion to life on the pages of a book simply called A LITTLE GIRL meets a LION PRINCE. “The little girl gets up to all sorts of adventures with the Lion Prince but when she returns to the paddock to meet up with her brother it’s like no time has passed,” she said.

“It’s been an interesting process because you don’t really know how to go about getting a book published, but you quickly learn!” One thing Alice didn’t have to worry about was hiring someone for the beautiful water-colour illustrations.

The semi-professional artist put paintbrush to paper herself and has already sold some advance copies.

A LITTLE GIRL meets a LION PRINCE isn’t the only literary work to be launched in Playford. Another Grenville volunteer, John Connelly, will release LET’S MOVE - a self-help guide to helping kids get fit and move well during sport.

Both books retail for $20 each and the authors will be at the Grenville Centre on Monday, 27 August at 11.45am to launch their works as part of Book Week. Meanwhile, Alice will be taking part in two special Story Times at Playford libraries in September: