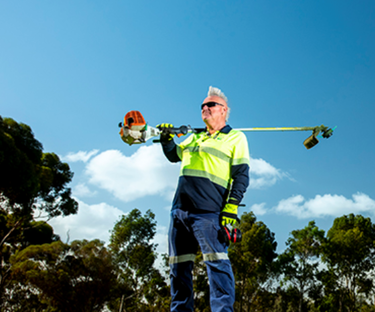 Share this article
You may have seen Kev out and about mowing, ﻿trimming, or installing markers on a street near ﻿you. He is one of our City Operations Officers, ﻿in the Parks and Verges team. A high vis guy ﻿for the past two years. ﻿It took him awhile to get here...

If you’ve ever met Kev you won’t forget him. His trademark mohawk is far from a passing fad - he’s had it for around 16 or 17 years. He mowed it through his head in a fit of defiance – a prior employer disliked his previous cut, which was a very precise flat-top.

“I don’t know what all the fuss is about. It’s just hair.”

You may have seen Kev out and about mowing, trimming, or installing markers on a street near you. He is one of our City Operations Officers, in the Parks and Verges team. A high vis guy for the past two years. It took him awhile to get here. Kev previously ran his own business as a glazier in construction. One of his jobs was installing windows at the Playford Civic Centre. “Everyone at council was so good to work with, it planted a seed… one day I might like to work for the City of Playford.”

Kev grew up in Elizabeth, and is entrenched in Playford life. He and his wife Sandy are currently building a home in Munno Para West - and this will be the 7th home they’ve had in Playford.

“I love it here and wouldn’t live anywhere else. ﻿Everyone is so friendly and chatty wherever ﻿you go. It’s just a top community.”

Kev volunteers at Grenville setting up for events, helping Sandy, who has been a cook at the Grenville Centre for 7 years.

“The patrons at Grenville are like extended family and last year, even our daughter helped to serve meals on Christmas Day.”

Several years ago, a work accident forced Kev to consider his future working options. After damaging his shoulders, he was relegated to a desk job during recovery – he kept busy organizing jobs, crews and work schedules, but he really wanted to get outside in the fresh air. He applied for several outdoor jobs at council as they came up, but despite having a builder’s licence and various certificates, he didn’t technically have a trade. What he really wanted to do was to get on a mower.

With the support of his Workcover Specialisist, Kev went to TAFE to study a Cert 2 in Horticulture and continued to volunteer with our social inclusion team.

A temp job came up driving the water truck for the Tree team, and he jumped at it with the new qualifications under his belt. The role eventually became full time, but Kev’s heart was on the verge. So when someone on the Parks and Verges team wanted to drive the water truck, Kev happily swapped roles and ended up right where he wanted to be.