The Windsor Fountain's back 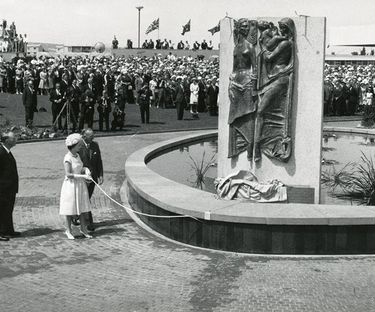 Share this article
The much-loved Windsor Fountain will once again grace Elizabeth’s landscape, being installed as part of the Playford CBD project.

The much-loved Windsor Fountain will once again grace Elizabeth’s landscape, being installed as part of the Playford CBD project. ^^ Her Majesty Queen Elizabeth II opens the Windsor Fountain, named in her honour, in 1963. Photo: Playford History Collection The refurbished fountain will feature at Prince George Plaza as the centre piece of a new retail, commercial and entertainment precinct bringing jobs and growth to the City of Playford.

City of Playford Mayor Glenn Docherty said many in the community will be delighted to see the fountain return to Elizabeth’s heart.

“Those of us who have grown up in Playford would remember the fountain being located near the clock tower and the old council chambers in Elizabeth, it has been missed by the community,” Mayor Docherty said.

“It is great to bring it back. Many long-term residents of our community ask all the time where the fountain is – now I can point to Prince George Plaza in our wonderful CBD.”

The fountain will be mounted on a platform in the Plaza, with water jets and lighting modernising the much-loved sculpture and bringing it to life. Read: Fountain fit for a queen

Her Majesty Queen Elizabeth II officially unveiled the fountain at Windsor Green, its previous location, on 21 February 1963, with a gold tap turned to set the flow running.

The occasion was Her Majesty’s first visit to Elizabeth, the town which she agreed to have named after her in November 1955.

Mayor Docherty said a feature of the fountain, designed by South Australian Housing Trust Architect Geoffrey Shedley, is a rising phoenix – a mythical bird signifying future and rebirth, which ensures a long life for the city.

“The phoenix is entirely appropriate given the nature of the visionary CBD project that is taking place at the Playford Civic Centre in Elizabeth’s heart,” Mayor Docherty said.

Prince George Plaza will be completed next month, with further works in the Playford CBD, including a $20-million medical hub, proposed hotel and a $35-million Playford Arena ice sports and entertainment centre funded by private developers, to commence in the near future.

• The fountain features vertical granite slabs representing an open book, along with two life-size figures and a child, which represent life and family.

• The sculpture work on the fountain is double sided. Facing the pool are two seagulls in flight, magpies, the emblem of SA, and a wedge-tailed eagle. Under the birds are a koala, possum, emu and kangaroo.

• On the sculpture’s reverse are two figures. On the left is Hermaphrodite, a figure of Greek mythology. On the right is a mother and child symbolising growth, population and, along with the rising sun, symbolic of continual rebirth.