The Pride of Northside's ready to rumble 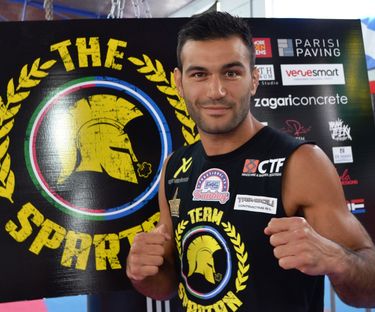 Share this article
Northside Boxing and Jiu Jitsu Club’s Antonio Caruso is all ready for the fight of his life this Friday night as part of the biggest show in town, the Danny Green versus Anthony Mundine grudge match at Adelaide Oval.

Photo: Rob McLean Speaking to playfordnews.com earlier today, Caruso was excited and confident about his super-middleweight bout with Friday Nwaiwu this Friday night.

“It’s probably one the most exciting events I’ve ever been involved in,” Caruso said.

Known for his devotion and commitment to training, Caruso will have plenty of intelligence on his opponent, having formerly been a sparring partner.

“We used to train together a fair bit – he’s been a pro for a while and I used to help him get ready for his fights and now we come across each other as opponents, which is funny,” Caruso said.

“But that’s the game and the business we’re in and it’s exciting and a good opportunity for both of us."

But, will Caruso, the Pride of Northside, win the day? You betcha.

Caruso is in the ring at about 7.30pm, which is early in the night, meaning he and his Northside entourage can enjoy the rest of the show – something he’s really looking forward to.

If you’d like to see Caruso in action prior to Friday night’s big bout, head to the Northside Boxing and Jiu Jitsu Club at Dauntsey Road, Elizabeth North, from 6.30 tonight.

“We’re having an open workout just to show everyone what we’ve been doing as a team,” Caruso said.

“People can come along and meet all the boys, we’ve got the Maloney brothers down from Melbourne, who are on the main card, and, hopefully, Danny Green will be dropping in as well.” The big tipAntonio Caruso's tip for the Man versus Machine fight: “Personally, I think Danny Green. I think with the weight, I think they’re a bit older now, there will be a lot of clashing between the two of them and Danny’s used to the bigger body. I think Danny’s more of a work horse, where Anthony’s more of a style fighter and I think, as they get older, their style went away and Danny’s big body and strength is still there. I’ll tip Danny.”