The north's school of the airwaves 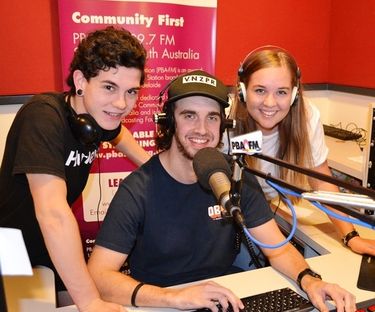 Share this article
Several aspiring local radio announcers have tasted airwave action through a program operated by Salisbury-based community radio station PBAFM and supported by the City of Playford.

Several aspiring local radio announcers have tasted airwave action through a program operated by Salisbury-based community radio station PBAFM and supported by the City of Playford. ^^ Ben Metcalfe (left), Tom Aldred and Amy Kershaw at the Jibba Jabba desk at PBAFM. Photo: Rob McLean Jibba Jabba is a 12-week program that gives young people from the City of Playford and City of Salisbury a shot at radio stardom.By participating in the program, young people, aged 16 to 25, run their own radio show on PBAFM from 4:30pm to 5pm each Friday.For Blakeview’s Tom Aldred, being involved in Jibba Jabba is the first step towards his life-long ambition of a career in broadcast.“Jibba Jabba’s a great way to start and get lots of skills in radio and experience in broadcast,” Tom said.“It’s been a great opportunity, especially for someone who’s had no experience in radio, and to get a foot in the door."

Tom has been working closely with fellow would-be announcers Amy Kershaw and Ben Metcalfe, developing a great rapport as an on-air team.Through Jibba Jabba, the students learn how a radio station works from the ground up.It is a program that has served well, with current Triple J breakfast team announcer Liam Stapleton having worn the headphones on Jibba Jabba in the past.

Aspiring radio announcers should contact Evan Dalziell (8255 5560) at the City of Playford to learn about future Jibba Jabba opportunities.