The man who gets the Reds on the field 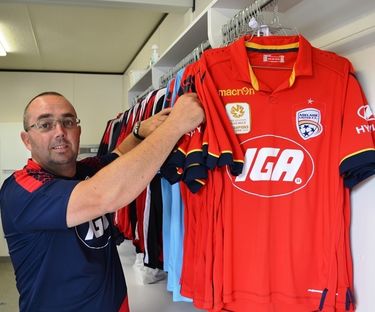 Share this article
Working behind the scenes of his favourite sporting club is a dream come true for Playford resident Chris Kelly.

When it comes to getting Adelaide United on the field, the most important work behind the scenes is being done by a Playford resident.

Starting with the Reds as a volunteer photographer, Andrews Farm man Chris Kelly never would have envisaged he’d be employed by the club as its kit manager.

A soccer tragic, who moved to Adelaide from the ACT, Chris volunteered with the club for five years, with its move to the Ridley Reserve training base two years ago giving him even easier access to the club.

While this season hasn’t progressed as fluidly as the reigning A-League champion might have liked, taking on the new role has been a joy for Chris.

“Anyone that’s into sports or is crazy about a team…to get into the inner circle of how things work is almost a dream come true,” he said.

So what does the kit manager do?

The role varies from day to day, but essentially Chris ensures all of the players’ training or playing kit is ready to go.

His tasks also includes things such as doing the laundry, ensuring the players are hydrated sufficiently during Adelaide’s hot summer days and even getting everything in order at the training facility.

Much of the work is done quietly behind the scenes, with Chris seeing little on-field action as he ensures everything goes to plan in his domain – the sheds.

While his new position is providing him much joy, the clear highlight of Chris’ time with the club took place on May Day last year, when Adelaide Oval rocked to the sound of more than 50,000 Reds fans cheering their team on to the A-League championship.

Chris was as close to the action as anyone that day, recording the moment with his camera, and admits he still gets goose bumps thinking about the Reds’ 3-1 win over Western Sydney Wanderers.

“I got there early…and I got to see everyone coming in and to see Adelaide Oval fill the way it did, it wasn’t just great for the AUFC, but also the A-League.”

Player's NightIf you would like to know a little bit more about what goes on behind the scenes at Adelaide United, the club’s inaugural Player’s Night is coming up on February 1.

To be held at the Playford Civic Centre, the evening will feature Reds stars Eugene Galekovic, Isaias, Dylan McGowan, Jordan Elsey and Tarek Elrich chatting about the club.

Tickets are strictly limited so book now on 8256 0500 or email theatre@playford.sa.gov.au

Doors open at 6:30pm for a 7:30pm start and bar facilities will be available on the night.