The all-new Playford City Tennis Centre is for everyone 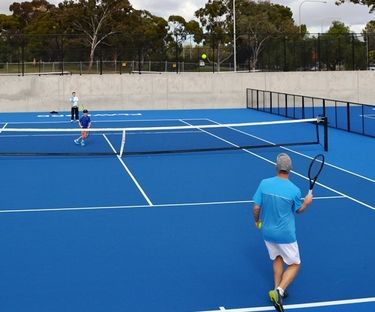 Share this article
The Playford City Tennis Centre is now open and is an ace way to get into one of the world’s most popular sports in your own backyard.

The Playford City Tennis Centre is now open and is an ace way to get into one of the world’s most popular sports in your own backyard.

Players from across the nation will participate in an Australian Ranking Tournament in November, while the world will come to Adelaide’s north for the City of Playford Tennis International (December 30 to January 7).

However, there are also many chances for locals to hit the courts.

The Grove Tennis Club has moved into the centre from its former home at Elizabeth Vale and its members are now playing on some of the best courts in the country. READ: First tournament World class Wall art a hit

Club secretary Gloria Dennis said the focus for members is that The Grove has a “great family feeling” and that the “community embraces the new courts”.

“It’s a great opportunity for local people to get involved with a tennis club and play in a wonderful facility,” Gloria said.

“I’d really encourage anyone in and around Playford to come and join us at our family oriented club.”The facility features 16 Plexi-pave courts and eight hot shot courts and, along with a new club house, the Playford City Tennis Centre is meeting the current and future needs for local community sport and for hosting major tournaments.

Meanwhile, if you just want a social hit up, there are two community courts at the northern end of the facility that can be accessed for free.

With a new playground being built at the site, there is plenty of free family fun for everyone.

To join The Grove Tennis Club, find them on Facebook or ring 8252 1900 for more information.