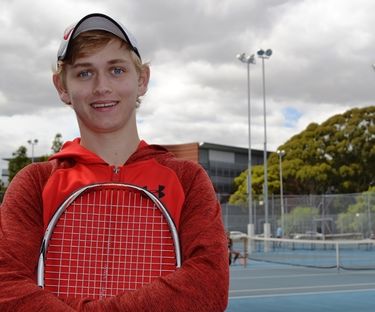 Share this article
Some of Australia’s brightest young sporting talents are battling it out on local courts this week, providing a taste of what we can expect when the Playford City Tennis Centre opens later this year.

Some of Australia’s brightest young sporting talents are battling it out on local courts this week, providing a taste of what we can expect when the Playford City Tennis Centre opens later this year. ^^ Craigmore's Austin Pike is among the young tennis hopefuls playing in the City of Playford Open at the Bicentennial Tennis Centre this week. Photo: Rob McLean

The City of Playford Open is currently being held at the Bicentennial Tennis Centre at Elizabeth Grove and features men’s and women’s players competing in an Australian Ranking Point tournament.

For some, the tournament is a step along the path to the fame and fortune that can come with an international career, while others aim to secure a US college education through the sport.

Tennis SA’s Ty Allen said the players are aged from 13 years of age through to adult, with some ranked in the world’s top 500.

Among the players are several from overseas, including 342 world-ranked Slovakian Zuzana Zlochova, while young Australian Maggie Pearce is also regarded as a player to watch.

“You’ve got higher-level players playing the tour in Australia…then you’ve got a group of juniors that would be looking to improve their ranking and get some quality match-play,” Allen said.

Among the competitors is Craigmore teenager Austin Pike, whose target for this year is to move into Australia’s top-500 men’s players.

“I’m hoping to get my ranking up as high as I can so I can go to college in the US,” Pike said.

His Playford campaign had a rocky start, losing in yesterday’s opening rounds, but he played in today’s qualifying consolation, hoping to gain some valuable ranking points.

Pike is looking forward to seeing how the development of the Playford City Tennis Centre, at Elizabeth East, impacts the sport.

Tennis SA’s Allen expects the centre to give the sport a huge boost.

“We’re really looking forward to taking some events out there in the future,” Allen said.

“It just gives us a fantastic facility to run different tournaments and competitions and, with that number of courts and facilities there, it’ll mean we can bring high-level participation events to the venue and that should generate some more local interest, as well as participation in the northern suburbs.”

The Playford Tennis Open continues today and will be played through to Thursday, with on-court action free to view.