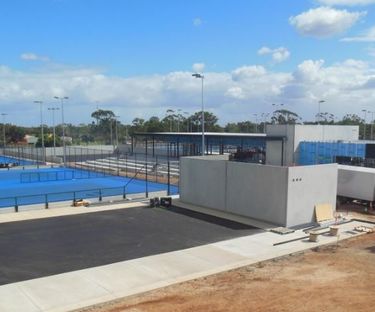 Photo: City of Playford The Grove Tennis Club has expressed its excitement about moving to the new Playford Tennis Centre being built at Elizabeth East.

The international-standard tennis centre is part of the Playford Sports Precinct project and set to feature: • 16 ITF compliant Plexipave courts;

• Club house with 180-degree view of the court area;

• LED court lighting. Speaking to members after a club meeting, in which she was installed as secretary, Grove Tennis Club secretary Gloria Dennis that while the club had enjoyed its time at the Bicentennial Tennis Centre, the new facilities will provide significant opportunities. “We hope you all share our excitement as we draw near to the move to the new facility. The Playford City Tennis Centre will simply be one of the best venues in Australia,” Mrs Dennis said.

Mrs Dennis, a long-time member of the club, said the club’s committee understands that “there will be much information to share over coming months”, but there will “be a concerted effort by the board to communicate regularly”.

The tennis centre is expected to be completed in the second half of this year, with the Grove Tennis Club moving into the facility in time for the summer season.

The facility will be managed by an outside source and is expected to attract a wide number of tournaments, up to pro-tour level.

In the meantime, places are available for the next series of night tennis at the Grove Tennis Club, contact Gloria Dennis (secretary.grovetennis@gmail.com). Other stories: