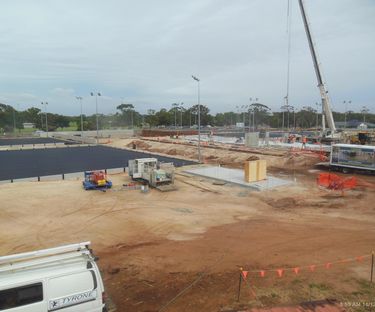 Share this article
Work is progressing on the City of Playford’s exciting tennis project.

Work is progressing on the City of Playford’s exciting tennis project. #SmartSports ^ The City of Playford's webpage features regularly updated photographs of developments at the tennis centre - this photograph was taken at 9am this morning. The Playford City Tennis Centre at Spruance Road is starting to take shape, with the foundations for the facility’s club rooms laid last week.

Over 600 tonnes of concrete was poured as contractors took the first steps towards having the club house framework installed by Christmas.

^ Check out our video of concrete being poured at the site. The 700-metre-square club house will feature change rooms, tournament office, medical room and kitchen.

“This is designed for everything up to Davis Cup and there’s a plethora of tennis events that can go there,” Mr Docherty said. ^ A video showing how the site will look upon completion. The facility will cater for high-end tennis action, but also community players, with two asphalt courts to be available for public use.

A new $350,000 community playground is also being built at the northern end of the facility, replacing the one that had previously been there.

The Playford City Tennis Centre is expected to be operational next summer.