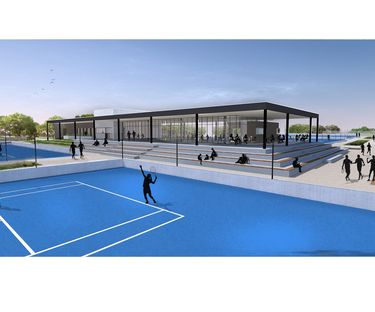 Tennis centre development progressing on schedule.The City of Playford's webpage features regularly updated photographs of developments at the tennis centre. Construction is well under way at the new Playford City Tennis Centre, with work on the facility’s club house expected to be happening in time for Christmas.

Despite some minor delays in the construction schedule due to spring’s heavy rain events, the Spruance Reserve-based centre is still due for completion in July 2017.

• Club house with 180-degree view of the court area;

The City of Playford’s Mayor Glenn Docherty said many of the international-standard competition courts, including a sunken main court, have been prepared ready for Plexipaving in the coming weeks.

“The club-house facility will also have its foundation laid shortly, and around Christmas time the main structure of the clubhouse centrepiece will be visible, with all the court lights in place,” Mayor Docherty said.

“The City of Playford is also pleased to report that in working with local engineering and construction firms contracted by the City of Playford, the club house will be almost entirely fabricated using Australian-made steel, supporting local and South Australian manufacturing.

“And as part of the build process, two new local job opportunities have been fulfilled for local job seekers to gain experience in the construction industry.”The Playford City Tennis Centre is part of the $55 million Playford City Sports Precinct that, to date, has included the construction of the Adelaide United Football Club training centre and administration building, flood lighting of Ridley Reserve and the Aquadome extension.

Meanwhile, development of a new lawn bowls facility on the site of the current Elizabeth Bowls Club is also progressing, with Elizabeth and Munno Para bowls clubs working together to form a new club to be known as Playford Bowling Club.