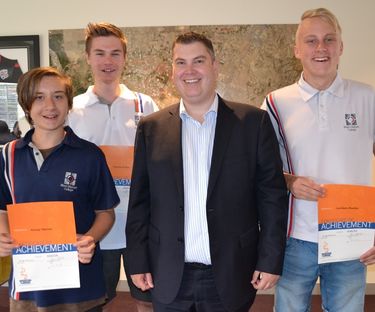 Share this article
Battling blisters and fatigue, a group of local teenagers recently found that Operation Flinders is no walk in the park.

Kasey Mercer, Darion Kolin and Lachlan Burke were among a group of eight students from the school who recently completed the program with life-changing consequences.

Darion, whose leadership potential was recognised during Operation Flinders, said the program had given him a new focus, especially as he will be undertaking year 12 in 2017.

“I’m glad I went now, because I can take so much from it,” he said.

“The skill and determination to push through those hard subjects and keep going, putting your head down and getting the job done is really important.”The graduation presentation was hosted in the City of Playford’s Mayor’s Parlour and was attended by Mark Oliphant staff, along with representatives from Operation Flinders.

A charitable organisation, Operation Flinders operates an eight-day wilderness adventure program for young people, aged between 14 and 18, through which the participants develop their personal and interpersonal skills.

“At the end of the day, if you can chase this (Operation Flinders) hard, you can do anything,” she said.

“Now it’s up to you to find out the path inside yourself, that thing you are interested in and want to chase in life.”

City of Playford Mayor Glenn Docherty, who is also a board member at Mark Oliphant, congratulated the students on their efforts and the positive example they are setting for the community.

“We are really proud, as a council, to have Operation Flinders interested in students in our area,” Mayor Docherty said.

“Sometimes people in our area don’t reflect who we are and what we do as a community – what you are doing is changing that stereotype.”