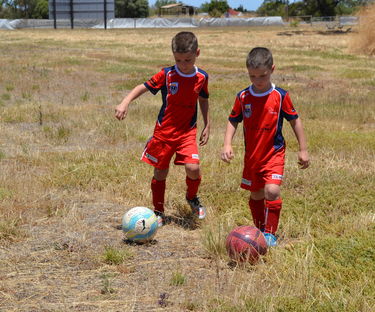 Share this article
Three local sports clubs are set to find themselves a new home, thanks to a #SmartSports partnership between a building developer and the City of Playford.

Three local sports clubs are set to find themselves a new home, thanks to a #SmartSports partnership between a building developer and the City of Playford. ^ Northern Wolves players James and Jake O'Brien enjoying a kick around on what will soon be their club's home ground at Eyre Sports Park. Three Playford-based sports clubs will have a new home with top-flight facilities at Penfield from October next year.

Developer AVJennings welcomed the clubs to their new home, an eight-hectare park, which includes a club room and three ovals, at a turning of the sod ceremony at Eyre Penfield yesterday.

AVJennings state manager Brian Virgo said the facility is part of a valuable community partnership in a growing area, with construction starting next month.

“Eyre is progressing well with the community growing rapidly, new homes under construction and work well under way on the creation of new parks and gardens within the development,” Mr Virgo said.

“Upon completion, Eyre will be home to around 2000 new homes, and approximately 5000 residents.”

The City of Playford’s Mayor Glenn Docherty said the sports park is welcome, as it will provide facilities for families in a fast-growing area.“With close to 2000 homes coming into Eyre for the life of the project, this development will see a great space for young families to play soccer, rugby and cricket all in the one place,” Mayor Docherty said.

Central District Rugby League Club president Adam Levi said his highly successful club is excited to be part of the project, which includes a pitch built to NRL standards and which is expected to be the premier venue for the sport in the state.

“These are amazing facilities that our club will be coming into,” Mr Levi said.

“It’s going to push us into the new wave with the youth coming into the club and will support us well.”

Having won four of the past five premierships and with a team in the grand final in each grade of the South Australian Rugby League last season, the Roosters believe the new facility will give them an ongoing edge over their opposition.

“It’s really going to be a new start for us, with plenty of young kids around in this community,” Mr Clarkson said.

With the facility opening in October, Rose & Crown will be the first club to use the facility, which will include three enclosed cricket nets. Meanwhile, Northern Wolves Soccer Club member Paul Bivone said his club welcomes the new facility, which he said will allow it to continue to grow.

The ovals and soccer pitch will be bounded on all sides by a network of landscaped reserves and walking and cycling trails.