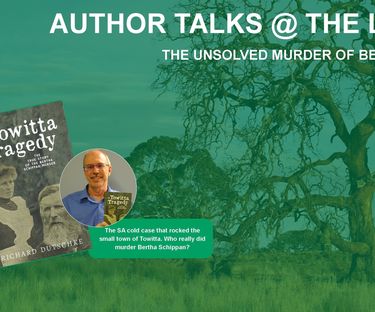 Share this article
Who killed 13 year old Bertha Schippan? &nbsp; This is the true-crime mystery that has captivated the country since 1902, when Bertha Schippan was found brutally murdered in her home on New Year’s Day.

This is the true-crime mystery that has captivated the country since 1902, when Bertha Schippan was found brutally murdered in her home on New Year’s Day. Author Richard Dutschke thinks he has the answer.

Among the suspects were Mary Schippan (Bertha’s 24 year old sister, who went to trial for the murder but was later acquitted), Mary’s boyfriend Gustav Nitschke, and Bertha’s own father, who had a history of violence.

After that fateful day life in the small township of Towitta, on the outskirts of the Barossa Valley, would never to be the same again.

^ A newspaper clipping of the Towitta murder from the early 1900s.

Ron Nitschke, the nephew of suspect Gustav Nitschke, spent over 50 years researching the case and spoke to many people who lived in the district and knew the family.

The vast majority of people in the Murray Flats and the Barossa Valley communities around Towitta believed they knew who murdered Bertha. However, it seems the only people who didn't were the police.

After Ron Nitschke died, it fell upon Dutschke to complete the research and share the story.

The Towitta Tragedy, the true story of the Bertha Schippan murder was published late last year.

“… After reading a two-page spread in The Advertiser by Ron Nitschke in 1988, I became interested in the story,” Dutschke said.

“However, it wasn’t until a year later that I contacted Ron, who then shared with me the true story of the murder of Bertha Schippan.”

Come along to the Author Talks @ the Library: The unsolved murder of Bertha Schippan and hear Richard discuss this cold case further and reveal who he believes to have been the true murderer. The book will be available for sale for $20 each at the event, with the opportunity for it to be signed by the author.

Author Talk @ the Library: The unsolved murder of Bertha Schippan